The Spooky Story of Margery Reed

Did you know that Margery Reed Hall will be the new home to many Daniels departments? The Office of Marketing and Communications, Undergraduate Programs and some faculty offices and classrooms will be relocated to this infamous building! Before moving in, you should know a little bit about the mysterious building! Margery Reed Hall once housed the theatre department before it was moved to the residential hall, JMAC. Why, you ask, did they move? Besides the fact that the building was falling apart and the department needed a more convenient location, many say it was due to the scary occurrences. One brave theatre alum, Anshu Bhatia, is speaking out for the first time to share his spooky story here: 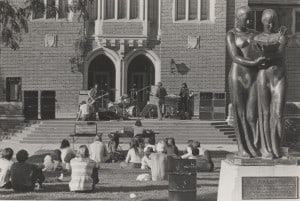 “When I was first working in the space, I was somewhat overcome by the creepiness of the building, and of course the folklore surrounding it, so I was rather scared. Noises from pipes and just an old building will do that to you. However, the longer I worked there, the more I realized the spirit of the building was a protective one, not only was she trying to protect herself, but also the students. I began to feel that when I was doing good work on a show or something, it was safe and serene. But when I was goofing off, the spirit would become angry and make it clear it was time to leave.

The clearest memory I have of the ghost happened one late, late night. I was working on some crazy project in the little theater involving a 55 gallon drum of water in the catwalk. Needless to say, she wasn’t too pleased. While working well past midnight, I would look into the balcony and see nothing. Then the next time I looked there was clearly a flashlight on – just shooting across the aisle – off again, then back on. I always thought I saw some kind of a shadow or ‘ghost’ holding the torch in the dimmest of ways. The light never hit me and went away rather quickly so the memory of the ghost was fleeting. Needless to say I turned off the lights and went home fast. The water in the show never panned out as I could not get the valves to work, but maybe it wasn’t me.”

To check out more ghost stories like this, read our upcoming magazine online next week! Happy Halloween and welcome home Daniels Pioneers! 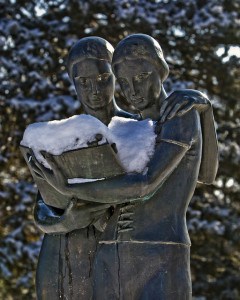 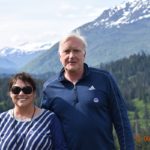