Making Space for an Internship 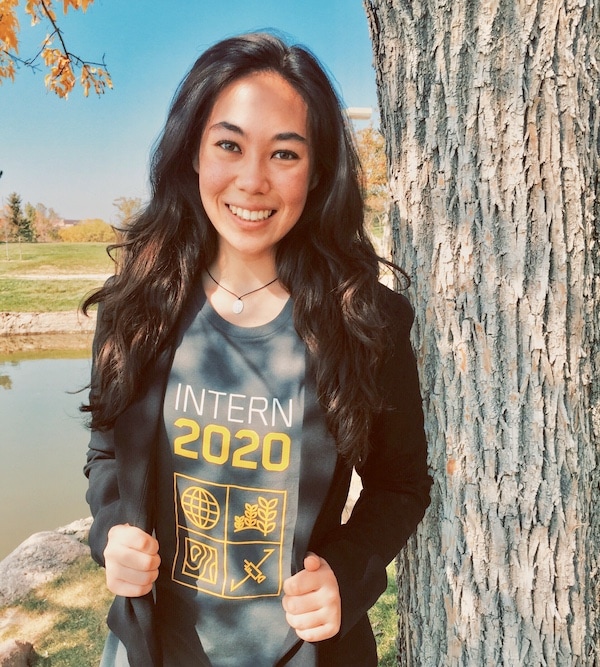 Like many students, Amina Penn was searching for the elusive perfect internship: one that would provide valuable experience in a field she was interested in and one that would hire her as an undergrad.

She found one that met all those criteria—and then some.

Penn, a second-year student double majoring in international studies and management (and minoring in entrepreneurship and Japanese), spent the summer with Maxar, a global space-technology company headquartered in Westminster, Colorado. Maxar’s futuristic-sounding work involves Space Infrastructure—manufacturing spacecraft for Earth observation, communications and space exploration—and Earth Intelligence, which extracts and analyzes geospatial data from satellite imagery to serve a multitude of applications and customers around the world. If you’ve ever used Google Earth, you’ve seen Maxar’s work in action.

As an undergrad working alongside graduate interns and established professionals in a high-tech environment, Penn knew she had her work cut out for her. But as a blend of her personal passions for science, space and technology and her studies in international business and relations, the internship was ideal.

“This was a perfect opportunity for her to combine her interests,” said Kathie Novak, Penn’s internship adviser and a teaching assistant professor in the Department of Management at Daniels. “I think it was everything that an internship is designed to be: try some things, get your feet wet, see how you really work and learn what you do and don’t want in a career.”

Penn worked in Maxar’s Earth Intelligence unit with customers in the Asia-Pacific region. She participated in calls and virtual meetings with representatives from foreign governments—as well as the U.S. Department of State and other domestic agencies—to understand how Maxar’s products and services could benefit their countries. The company’s satellite imagery and geospatial insights are often used to assist with large-scale operations such as national security, natural disaster relief and climate change.

Maxar is a global space-technology company headquartered in Westminster, Colorado

Maxar’s cutting-edge technology and work with high-level diplomats would be a challenge for anyone, regardless of their age or level of experience. But even so, Penn’s supervisor Tom VanMatre, director of international business development at Maxar, said her impressive work ethic helped her stand out and get a firm grasp on her responsibilities.

“She wouldn’t just do the task at hand,” said VanMatre. “She always went above and beyond, and this is in an industry where exceeding expectations is the norm.”

In one instance of “going above and beyond” that VanMatre recalled, Penn was able to steer an entire meeting with a foreign embassy’s staff into a productive resolution.

“We had what we believed to be the right solution in place, but midcourse through the meeting, we were talking past each other a bit,” VanMatre said. “In real time, Amina was able to synthesize what they were saying with the understanding of what Maxar could offer, then pivot the conversation to be more informative for the embassy staff.”

Thanks to her stellar performance, Penn has already been invited back to Maxar next summer, a rare invitation to be extended in advance, VanMatre said. Depending on the state of international travel at that point, Penn aspires to gain regional experience while working from Maxar’s Singapore office. Eventually, she’s hoping to study abroad in South Korea or Japan, earn her master’s degree and work for an international company.

While she can now add “international business negotiator” to her resume, Penn says the most valuable lesson she took from her internship was the fact that it even happened at all.

“I definitely shot for the moon with the internships I applied for,” she said. “A lot of [them] asked for graduate students, but it’s important to know that age shouldn’t limit your experience. Don’t give up or be afraid.”