Students competing in the 19th annual Race and Case competition were not shy about their recommendations to case sponsor Lockheed Martin. Each year, the Daniels College of Business partners with an organization to come up with a real-world case for graduate students to tackle; it is the only business ethics case competition and ski challenge in the nation. Students had two weeks to delve into the challenges of the Lockheed Martin case before presenting their recommendations to judges.

On Friday, Jan. 21, students suggested a wide variety of strategies to build awareness and drive Lockheed Martin into the future, including:

Judges for the 2022 Race and Case Competition

Heather Erickson is the director of Talent and Organizational Capability at Lockheed Martin Space. She says her organization benefits from sponsoring this competition in two main ways. The first is partnering with a local university that they know produces strong talent who can join their organization.

The second way Erickson says the partnership is beneficial has to do with the case competition itself. “We thrive on the teams’ insights and ideas, who share a fresh perspective on real business challenges,” she said. “Our demographic has shifted over the last few years. When I started seven years ago, the tenure was very different. Now, approximately 50% of the workforce at Lockheed Martin Space has zero to five years of experience in the company, so we use these insights to ultimately help our culture and business thrive.”

Saturday, teams woke up to chilly, but sunny conditions in Breckenridge, and nearly 4 inches of new powder. Students could ski or snowboard down a timed run at the Vail Resort property. The fastest male and female times comprise the final 10% of each team’s overall score. 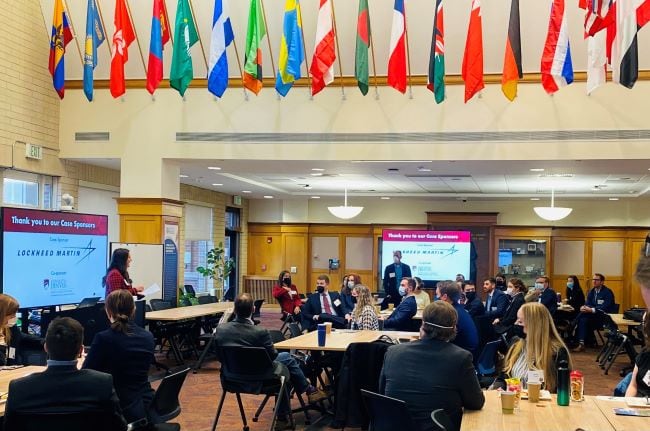 While the fast skiers were impressive, they didn’t knock Team F from the highest score overall.

The Daniels College of Business wishes to thank case-sponsor Lockheed Martin, especially John Wasong who helped Teaching Associate Professor Paul Holt write the case. The winning team will go on to represent Daniels in the national competition which will be hosted at DU Feb. 24-26.