Travel Courses in the COVID Era 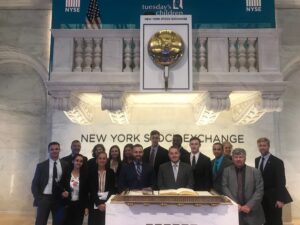 One of the most unique classes from the Reiman School of Finance is FIN 4800, An Organized Walk Down Wall Street. For the 4-credit class, students get the chance to spend five days in New York City, literally walking down Wall Street and meeting with and learning from workers in brokerage firms, exchanges, commercial banks and other institutions. Of course, when the pandemic halted travel, this class needed a little redirecting. In danger of losing its biggest appeal—the in-person travel and meeting with these leading professionals—something interesting happened. The class might have gotten even better.

Finance Professor Maclyn Clouse, who first developed the course back in August 1991, capitalized on his decades of contacts and moved the interactions to Zoom for fall 2020 and summer 2021. The informal setting allowed the Wall Street professionals to feel more at ease and provide even more insights than they had at the more formal in-person meetings.

“In many cases, because they were doing it online, they could spend a lot more time with us than if we had visited them in the office in New York,” said Clouse. “Students got more time up close and personal with high-level people.”

Student Cass Schmidt agreed. She took FIN 4800 this past summer, and called the class a highlight of her DU experience. “I felt like, in a way, we received a more in-depth experience with the speakers … Without classes like this, I would never have gained the opportunity to learn about the finance industry with such a hands-on approach,” she said. “In the virtual setting, we got to take down some of the walls of formality and interact with leaders of Wall Street at a level I can’t imagine we would have had otherwise.”

The virtual class ranged from senior-level all-star panels speaking on the past, present and future of their industry, to single speakers drilling deep into their areas of expertise, to young investment banking analysts talking about starting out on Wall Street. The speakers’ candidness and availability was only possible because of the ties Clouse and other finance professors have cultivated over the years.

“We’ve developed some really good relationships, and the alumni that have been involved are excited about doing this course each time we ask them to do it,” Clouse said. “Their support enabled us to do something like that (shift to Zoom). That’s what really made it possible.”

Besides giving students an unparalleled learning opportunity by introducing them to these Wall Street experts, the finance class has another benefit: it introduced DU to Wall Street. When Clouse first started taking students to New York 30 years ago, many there were unfamiliar with DU. By visiting twice a year, the class increased the University’s visibility, and now several DU alums working on Wall Street—including former FIN 4800 students—are part of the class, hosting students and sharing their knowledge.

The Wall Street class was so popular and well-received that a similar class with travel to Brussels and London was added a few years back. That went virtual in spring 2021, and without geographic constraints, Clouse was able to expand it to include finance speakers from Paris and Oslo, giving students even more connections and insight.

Although the pivot from in-person travel to Zoom meetups was a successful one, Clouse and students are keeping their fingers crossed that they can physically hit the streets again this fall. A smaller version of An Organized Walk Down Wall Street—the fall class is 11 students strong versus the usual 15–25—is scheduled to be back in real-world action in late October, ending with the New York visit the week of December 6–10.

“We’ll keep it small and hope they’re willing to let in a small group,” Clouse said. “We’ll see what travel looks like then. If we can’t do the trip that week in December, we’ll turn it into a completely virtual week.” And who knows; it could be even better.