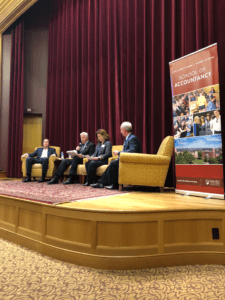 It seemed like the only seat available in Daniels’ Reiman Theater this past Monday evening was the one for which the two men on stage were vying: The seat heading up Colorado’s Department of Treasury.

Democrat Dave Young and republican Brian Watson were on campus for a political debate and the packed crowd of students, staff, faculty and community members gathered to hear their visions for Colorado’s financial future. Young and Watson are running for state treasurer—a position that will soon be vacated by term-limited incumbent (and Colorado gubernatorial candidate) Walker Stapleton.

Sharon Lassar, director of the School of Accountancy, kicked off the evening by introducing Daniels alumna Sheila Weinberg, founder and CEO of Truth in Accounting—an organization that works to compel governments to produce financial reports that are understandable, reliable, transparent and correct. The School of Accountancy and Truth in Accounting co-sponsored the event while Denver Auditor Timothy O’Brien moderated the debate.

“The one-hour debate will consist of opening remarks, questions that were compiled by the School of Accountancy, questions that came in during the registration process and closing comments,” O’Brien said. “Each candidate will have up to 90 seconds to respond, alternating who answers each question first. We tossed a coin and Brian Watson will begin.”

Watson, an entrepreneur originally from Olathe, Colorado, noted that growing up on the Western Slope gave him an appreciation of hard work, grit and stewardship, as well as a love of the outdoors. “I came from a family of entrepreneurs,” he said, “and my passion was to always go out and try to create jobs and opportunity, and empower people.”

Pointing to his commercial real estate investment company, NorthStar Commercial Partners, as an example, Watson said, “I believe experience matters … I want to bring that outsider’s perspective, that business experience, that entrepreneurship to the state treasurer’s office to make a positive difference on behalf of the people of Colorado.” Watson added that he wouldn’t take a salary if elected because he believes that “government has gotten out of control—in its cost and its growth.”

Following Watson, candidate Young took the stage, first discussing his motivation to run for State Treasurer. “My sister is intellectually and developmentally disabled,” said the former math teacher and current state legislator from Greeley, Colorado. “She’s lived a tough life and I discovered that she wasn’t getting the services that she needed. As a result, I started digging into that to try to figure out what can be done to solve that problem, and the more I dug into it, the more I realized that she wasn’t the only one who was reaching some really difficult situations trying to get services.”

Young explained that he’s spent the last seven years as a state representative trying to help vulnerable people like his sister, and would continue that work as state treasurer. “The reason why my sister and others like her couldn’t get the services they need was because we have a funding crisis,” he said.

Following the candidates’ opening remarks, Watson and Young were asked about their stance on issues they would likely bump up against as state treasurer, including challenges with the Colorado Public Employees’ Retirement Association.

Regarding PERA, Watson said that he would call every single board member and take them out to coffee or lunch to get to know them as people and “figure out how we can come up with solutions together.” Young believes if Watson became state treasurer, he would have a conflict of interest as a PERA board member because of his business. “The reason that [Watson] is not going to take a salary is he’s going to continue to run his company while he’s the treasurer. So, he has a divided interest there. And in fact, a major conflict of interest.”

However, despite the candidates’ different positions, they both expressed a desire to do what’s best for the people of Colorado.

The candidates also agreed that it was encouraging to see so many people in the audience. “I want to thank each of you for actually showing up,” Watson said. “Let’s give everyone a round of applause … not everyone can come see us debate but I think it’s important to be informed.”