This Future Leader Brought to You by Scholarships 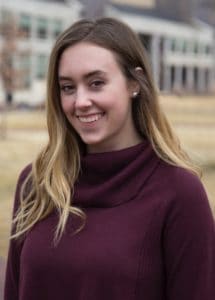 A little discomfort doesn’t scare Ciera Blehm. Heavy workload? She thrives on it. Solitude? No problem. Culture shock? Bring it.

From a very young age, the Daniels junior from Fort Collins has made stepping outside her comfort zone a regular practice. She has consistently shunned the easy route, from electing to double major in finance and socio-legal studies to interning in a country where she knew no one. Consequently, Blehm has an understanding of herself and the world that belies her youth, and a powerful drive to make a difference.

“I don’t do well being bored,” she says. “When I came to DU, I thought I wanted to be a lawyer so I started in public policy and international studies, and they were great classes but I wasn’t challenged. So I analyzed the areas of my skillset that I should strengthen. I knew that if I majored in something like finance I would always have a challenge.”

A passion for social justice fueled by a freshman seminar that explored the issue of wrongful conviction led Blehm to select socio-legal studies as her second major. “It examines how we look at the law and also recognizes that the law is not absolute, and the world isn’t black or white. How do we best utilize our understanding of this in order to do good in the world?”

Blehm realized that doing good in the world entails gaining experience in it, which led her to study overseas for four months in 2017. But rather than selecting a country and school where many of her friends were going, Blehm took a more solitary path. “I asked myself what type of space I wanted to put myself in where I would feel enough discomfort to learn something,” she says of her decision to study in Belgium. “I wanted to go somewhere where I didn’t know anyone because I wanted to test my limits.”

As if studying abroad wasn’t enough of a test, Blehm decided she wanted work experience overseas as well, which led to an internship at EY in the firm’s Brussels office. “I was the only American. There were people from Hungary, Latvia and France. There was someone from Italy, someone from Wales. I felt a little bit of culture shock because we’re taught a certain etiquette in the States,” she says, noting that her international colleagues, not surprisingly, often played by different rules. “But the second I found my space within the team, started using my skillset, and speaking out and being my own person, that’s when I started to do a lot of really good work.”

Blehm has a long track record of doing really good work. While still in high school, she was selected to be a youth ambassador for Colorado and was one of only four ambassadors asked to weigh in on a new logo for Colorado’s state agencies (the now ubiquitous green triangle was unveiled in 2013). Before starting as a DU freshman, Blehm was selected to serve on the State Farm Youth Advisory Board and tasked with helping to grant $5 million to service learning programs nationwide—an opportunity that presented itself while she was interning for U.S. Sen. Michael Bennet in his Fort Collins office. The summer before her sophomore year at DU, Blehm interned for State Farm in its Bloomington, Illinois, headquarters, helping to project manage the redevelopment of the company’s call center communication system. During her sophomore year, Blehm interned at Revolar, a Denver startup specializing in safety devices, where she worked to create an ambassador program on college campuses across the country. All of this was on top of her coursework, and her co-creation of the Into the Light initiative at DU—which strives to end sexual assault on college campuses—and the CAPE Survivors’ Fund—which provides financial assistance for students who have experienced sexual assault.

“Having all these experiences at such a young age made me recognize the power of my voice,” she says. “You don’t have to be a certain age or have a certain degree to own the space you’re in. If you’re confident and you believe what you’re saying, people are going to believe it too.”

One thing Blehm believes in saying is “thank you,” and she’s quick to point out that none of her experiences would have been possible without the numerous scholarships she’s received over the years.

“If I didn’t have scholarships, I don’t think I would have been able to be a student here,” she says. “They have helped me immensely and have supported my passions so that I can focus on what I love to do rather than having to work a ton of different jobs. There are so many students who don’t receive financial assistance or scholarships and they can’t dissect their purpose during college because they have to find ways to pay for college. For me, it’s a constant reminder that, because of others, I can do good work.”