Students were awarded $12,000 for their ideas at the 2018 Inclusive Excellence Case Competition

Bottom line, diversity in the workplace is good for, well, the bottom line. At least that’s the notion some University of Denver students emphasized to a panel of judges at the Inclusive Excellence Case Competition on Friday, May 11, at the Joy Burns Center. 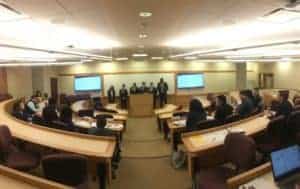 The competition, which is in its ninth year, is hosted by Daniels and is open to all DU students interested in working on a diverse team to address a business challenge related to inclusiveness—one of the University’s core values.

“At Daniels, we recognize that our success is dependent on a number of factors, including how we value and foster the diversity of our community,” said Daniels Dean Brent Chrite. “Our commitment to diversity goes beyond celebrating our differences; our goal is to become leaders in demonstrating the power of inclusive excellence.”

At this year’s Inclusive Excellence Case Competition, six teams of six students were asked to identify ways in which members of the senior leadership team at Denver International Airport—which has a predominantly white male workforce—could successfully implement diversity and inclusion initiatives at DIA, while also getting buy-in from key members of the organization. 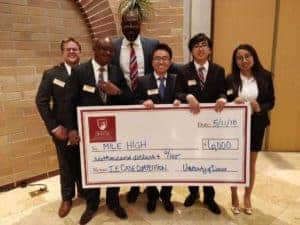 Over the course of the competition, the six student teams presented their recommendations to a panel of 11 industry experts, including members of DIA’s senior leadership team. After receiving on-the-spot feedback from the judges, the students gathered in the atrium of Joy Burns Center for the awards ceremony. 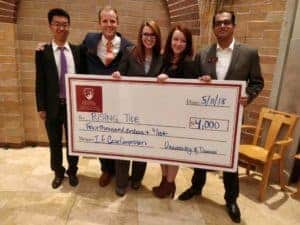 Olga Arzhayev, an undergraduate finance student at Daniels who was participating in the competition for the second year in a row, said, “We spent a lot of long nights preparing for our presentation and it feels so good to see that our hard work paid off.”

Arzhayev, whose team won second place and $4,000 in prize money, added, “Our team is mixed in terms of gender, race and age. We also represent five countries and are in different academic programs. We meet the definition of diversity and I think it was because of this that we came up with the solutions we did.”