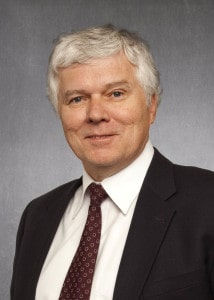 When Sam Cassidy started teaching an evening class in the Daniels Executive Education program, something unexpected happened to him.

“I was running the Colorado Association of Commerce and Industry (CACI) and would go to teach after a long day of work absolutely exhausted,” Cassidy said. “But by the end of class, I was energized and excited.”

Licensed as an attorney since 1975, Cassidy owned a title insurance company and a real estate development firm for a collective 20 years before making his way into politics. He was minority leader of the state Senate from 1993 to 1994 and Colorado’s lieutenant governor from 1994 to 1995. Prior to CACI, he served as president of the Economic Development Council of Colorado (1997 to 1998) and as an arbitrator for the American Arbitration Association (1995 to 1996).

Cassidy’s experiences as an entrepreneur, politician and advocate for Colorado businesses made for a rich, relevant experience for students in his classroom. After just a few quarters as an adjunct, Cassidy joined the College full time in 2000.

His Daniels career was marked by service and a commitment to advancing ethics education. In 2002, he was appointed the first chair of the new Department of Business Ethics and Legal Studies, which is one of the few academic departments to merge ethics and law. Cassidy decided Daniels was the perfect place to bring executives to campus to share their experiences leading with integrity and ethics.

“I wanted to put corporate executives on stage to talk about why ethical leadership is important and how it actually looks in the real world,” he said. The Voices of Experience speaker series was born in 2004, initially intended to augment the graduate student experience. Eventually, Voices gained traction in the business community. Cassidy helped bring on corporate sponsors, and more than $200,000 in scholarship money was awarded during his tenure as director. Today, the signature Daniels program brings in renowned C-level speakers and draws upwards of 1,000 business professionals, students and alumni to each event.

In June 2015, Cassidy retired from Daniels after 15 years and started a new chapter of his career—as a judge of the Archuleta County Court in Pagosa Springs, where he lived for a decade while serving in the legislature. He heard criminal and civil cases three days a week until his retirement in 2016.

“I’m definitely someone who loves to learn and boredom is my enemy,” he said, adding that he makes plenty of time to fly fish, paint and enjoy the beauty of Pagosa Springs.

Cassidy’s tenure at Daniels is something he’ll cherish forever. “I loved my time at DU so much because I was constantly having intellectual exchanges with bright young people, our future leaders,” Cassidy said. “My students reminded me of what’s great about the world and why I still need to continue to grow and learn. They kept me young.”