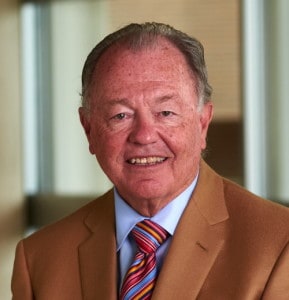 Born in Manitowoc, Wisconsin, Bob Newman grew up in Northern California and attended the University of California, Berkeley, graduating in 1965 with a B.S. degree in Operations Research. After receiving an MBA degree from the University of California, Los Angeles, he worked as a computer programmer at North American Aviation (now Rockwell International) in Los Angeles. In 1969 he joined Motorola Inc. in suburban Chicago as assistant to the Corporate Director of Information Systems. Later he moved to product areas (as engineering section manager and acting product manager) where small computers were being used for the first time in paging, cellular telephony, and command and control systems. In 1974, he was recruited by Haskins & Sells CPA’s (now Deloitte & Touche) as an information technology consultant in the Denver office, leaving in 1976 to start his own business as a software designer and developer for smaller computers.

In 1978, he merged with another small firm to form J.D. Edwards & Company, which eventually grew to almost 6,000 employees in 15 countries. During the 1990’s,JDE became the fourth-largest application software company in the world, with approximately $1B in annual revenues. When J. D. Edwards went public in 1997, Newman left to pursue other interests, although remaining a director and advisor until JDE merged with Peoplesoft in August 2001.

Currently Newman owns and helps manage a venture capital company called Greenwood Gulch Ventures. As a result, Newman sits on a number of small company Boards. He holds a Ph.D in High Technology Management (Golden Gate University) and was formerly an Adjunct Professor in the Daniels College of Business.  He occasionally lectures at other universities and referees business plan competitions.

In addition to the Daniels College of Business Executive Advisory Board, Newman is currently a board member of the Denver Center for the Performing Arts, The Denver Art Museum, the Getty Museum Paintings Council, and The University of Miami Entrepreneurship Council. A key interest is the Robert & Judi Newman Performing Arts Center at the University of Denver which provides classrooms and studios for the Lamont School of Music and three performance venues.

Newman has been married to Judi for 47 years, has one daughter, Jennifer, married and living in Denver, and two granddaughters, Brianne and Nora.

Prior non-profit board memberships include: