Moroccan chicken and herb aioli toasted sandwiches may not sound like they belong on a McDonald’s menu. However, in Australia, the chain is turning things upside down – and besting the rest of the world in sales.

In June, McDonald’s reported 10 consecutive months of positive sales in Australia, a far cry from the more than a year without same-store sales growth in the United States. Australia has been held up by McDonald’s executives over the last year as a bright point for the company, especially as locations in the U.S. struggle to appeal to customers and China deals with negative PR after a food quality scandal.

So, what’s up in the Land Down Under? In the last few years, the country has served as a testing ground for some of McDonald’s most innovative ideas, some of which may help the chain stateside as it aims for a turnaround.

In May, McDonald’s launched a new ad campaign in Australia that seeks to overturn the chain’s reputation of serving cheap, low-quality food. Closing with the phrase, “How very un-McDonald’s,” the commercials show foodie customers surprising themselves by enjoying a “gourmet” meal at McDonald’s. The campaign is intended to accompany the national rollout of the Create Your Taste menu.

McDonald’s began testing Create Your Taste in Australia, as well as a handful of locations in California, in 2014. The platform allows for customers to order using a kiosk, personalizing their burger with gourmet ingredients such as parmesan cheese and pineapple. After early successes, the company invested $1 billion to upgrade restaurants across Australia, bringing Create Your Taste to 750 out of around 900 locations by the end of 2015. Now, Create Your Taste has become a major point in McDonald’s turnaround plan internationally, with plans to make the kiosks available at approximately 2,000 locations across the U.S.

“Market teams in Australia have recognized and acted upon the need to offer greater choice and personalization with our burgers and we’re seeing encouraging results,” says McDonald’s spokesperson Becca Harry.

Create Your Taste isn’t the only thing that has been introduced in McDonald’s so-called “customer learning labs”—or test restaurants – in Australia. In October 2014, a lab in the Sydney suburb of Castle Hill became the first to offer Create Your Taste, as well as testing table service. Other tests that have traveled from the Castle Hill restaurant to U.S. testing grounds include digital menu boards and home delivery. McCafe barista-made coffee via drive thru is now available across Australia, but not yet for sale in the U.S.

“McDonald’s is innovating and changing again to meet the needs of our customers,” McDonald’s Australia CEO Andrew Gregory said in a statement at the time. “All of our innovations have been led by Australians. What we’re really doing here is just what our customers have asked us to do.”

Another hyper-visible Australian Learning Lab is The Corner, a former McCafe location in Sydney stripped of nearly all markers of McDonald’s and reopened as a trendy café. The menu includes items such as chipotle pulled pork, lentil and eggplant salads and Moroccan roast chicken. Even the interior design is completely different, with pastry counters and food served on wooden sandwich boards.

With Create Your Taste rolling out at the majority of Australian locations, the term “learning labs” is out of commission in Australia today as the trial has become the norm. However, The Corner still serves as a one-off concept intended to gauge customer feedback, with the possibility of ideas and products that customers love showing up at other restaurants.

In many ways, Australia is the perfect testing ground for McDonald’s because of the market’s similarity to the U.S.

“Australia is, in some ways, like the U.S. If the market testing is in a variety of Australian markets, McDonald’s will have a reasonably good read on how a variety of markets here will respond,” says David Corsun, associate professor of the Fritz Knoebel School of Hospitality Management at the University of Denver. “This isn’t the first time McDonald’s has used Australia – when I was in Sydney in 1998 I saw a McCafe, something I’d never seen in the U.S.”

The history of McCafe provides a window into McDonald’s current international testing plan. In 1993, the first McCafe opened in Melbourne. The brand has become one of the largest coffee chains in Australia, and has 1,600 locations (most inside of existing McDonald’s) across Europe.

However, McCafe never caught on in the U.S. in the same manner. The company originally hoped to transform thousands of restaurants into classier (and more expensive) McCafes when the brand made its American debut in 2009. Instead, McCafe offerings ended up getting rolled into the breakfast menu as a line of drink options. In 2014, the chain aggressively marketed the McCafe concept, with promotions such as two weeks of free coffee. The company at the time highlighted McCafe and the breakfast menu as a customer-focused area of growth, but the marketing push failed to boost sales into the positive.

While Australia became a testing ground for McDonald’s because of similarities to the U.S., McCafe shows that lessons learned down under don’t translate exactly to the American market. Instead of becoming a chain that can stand alone (or at least in conjunction with McDonald’s locations) as in Australia and Europe, McCafe’s success has been more mixed, with triumphs coming in less expected areas. In 2014, the company announced the national rollout of bagged coffee and K-cups, partnering with Kraft Foods Group. Kraft reported in May that the packaged coffee first year sales were projected to exceed $100 million. In McDonald’s locations, McCafe is no Starbucks 2.0, but has helped boost sales and goodwill from customers, including among millennials.

Australia’s tests may go through a similar transformation to fit the American market. Create Your Taste, for example, hit road bumps in the U.S. as franchisees who rely on drive-thru for the majority of sales argued that the new equipment didn’t meet customer needs. The solution: adding the same, gourmet ‘Tastecrafted’ menu at locations more heavily focused on drive-thru. The result is a “very un-McDonald’s” offering, tailored to an American audience.

“Un-McDonald’s” is what the company needs right now. McDonald’s CEO Steve Easterbrook has said that the company’s turnaround plan is rooted in ditching traditional approaches of “conservationism and incrementalism” in favor of reputation repair and localized tests. Tests have included health-conscious and gourmet-tinged options such as ground chicken burgers in the U.S. and lettuce wrapped burgers in Australia.

Healthy food has never been a strong seller for McDonald’s. However, the new tests have a nuanced take on nutrition that encourages the customization of offerings based on local and individual preferences — a model that is rooted in McDonald’s testing in Australia.

“I honestly don’t believe McDonald’s is going to lure in new business with salads, fresh fruit and the like,” says Corsun at the University of Denver. “I think what’s increasingly important, and especially difficult to deliver given McDonald’s infrastructure at the unit level and its price point, is good food that feels customized.” 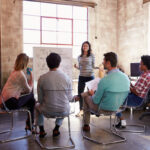