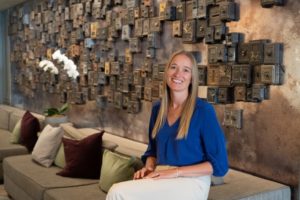 The greatest lesson Sarah Treadway learned about hospitality came not from a deluxe island resort or a five-star big-city hotel, but from a trip to Bangalore she took as part of her Executive MBA studies at DU’s Daniels College of Business.

“The hospitality that we were shown as foreigners in India was unlike any that I’ve ever experienced at the fanciest Four Seasons hotels in Hawaii or anywhere else,” says Treadway (MBA 2009), president and co-CEO of Denver-based Stout Street Hospitality. “These people really welcomed us like we were family. It’s something I try to ingrain in my employees: We are here to better the lives of all of our employees and the lives of all of our guests. If we’re not doing that, then we’re doing something wrong.”

Treadway is now bettering the lives of employees and guests at hotels around the country. Stout Street Hospitality is the parent company of the Magnolia Hotel in downtown Denver, as well as Magnolias in New Orleans, Dallas, Houston, Omaha and St. Louis. The company was founded by Treadway’s father, Steve Holtze, in 1993; Treadway and her brother, Eric Holtze, became co-CEOs of the company in 2016.

Treadway came on board after earning an undergraduate degree in European history from Bucknell University, then working for Four Seasons global sales offices in New York and Los Angeles. Enrolling in the Executive MBA program helped to enhance her business skills and to boost her international experience. Every EMBA cohort takes a trip abroad; for Treadway and her classmates, it was an eye-opening journey to Dubai and Bangalore. 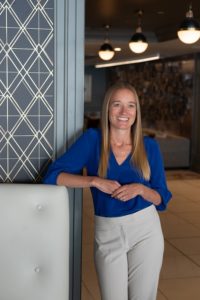 “That kind of trip just reminds you that this is a very small world, and doing business with all kinds of people is a wonderful learning experience,” she says.

“I provide education assistance to all of my employees, and a couple of years ago, I was looking at the statistics and I was unhappy with how few people were taking advantage of it,” she says. “I got with a group of employees, and we figured out that it was because 90% of my employees are hourly employees—they might be immigrants or new citizens—and they don’t want to go to college. They want their kids to go to college. So we amended the education assistance, and it’s [now] offered to any employee or any employee’s child or grandchild that they care for. And we’ve gotten a big spike in participation.”

Treadway takes her treat-them-like-family philosophy a step further through her philanthropy on behalf of kids and families. She sits on the board of the Rocky Mountain Children’s Health Foundation, and she and her brother—along with Magnolia staffers around the country—are big supporters of the Ronald McDonald House.

“Our hotels do what we call five-star days for each of the houses in their markets at least once a year,” she says. “Our team goes into the house and the maintenance team fixes whatever is broken and paints a couple of walls; the housekeeping team does a deep clean of all the rooms. If they need sheets we have sheets; if they need robes we have robes. We also have taken in families when the house is full. That sort of symbiotic relationship just works.”