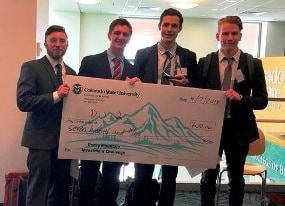 Reiman fielded two teams in the third Rocky Mountain Investment Challenge (RMIC) held April 7 at the Colorado State University-Ft. Collins campus. Reiman students competed with students from schools across the region, from Colorado, Wyoming, Nebraska and Utah, to put their real-world finance skills to the test.

Teaching Associate Professor Andy Sherbo led the other team with members Carys Helm and Sean Koval, who presented on their research of SunTrust Banks Inc. 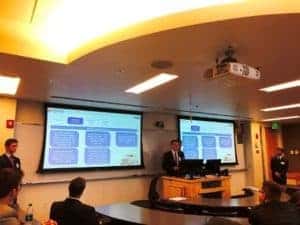 The undergraduates analyzed these two publicly traded securities to recommend either a buy, sell or hold on the company’s stock. Both teams had 15 minutes to present their analysis and 10 minutes of questions and answers to convince a panel of independent Chartered Financial Analysts and investment fund managers.

A team from Daniels has won one out of three RMIC competitions. In 2016, Reiman students won first place and in 2018, second place.