Musings on Passion and Privilege from Cape Town

Before going to Africa for the first time in summer 2008, my mother, Sally, told me, “You’ll never be the same once you’ve seen the sun set on the other side of the world.” She was correct, of course. Leading up to that trip, I was anxious about the hardship I would witness. I was afraid of the guilt I might feel about seeing others suffer. I had never been exposed to such abject poverty, and continuing to live in ignorance seemed like the more blissful alternative. But when I arrived, I was amazed at the life and joy the Ugandan people displayed. In many ways, I shifted my pity to the people back home in the U.S. who weren’t living such exuberant lives. 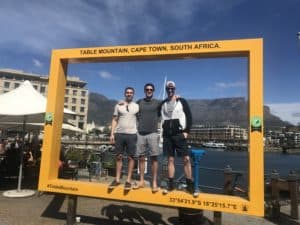 While my first trip to Africa exposed me to the hardships of poverty, my second trip—to Cape Town, South Africa, in March with my Daniels PMBA cohort—allowed me to see a stark contrast between wealth and scarcity coexisting in close proximity. Leading up to our journey, Professor Kerry Plemmons and Director of Global MBA Programs Amanda Cahal emphasized the wealth dichotomy, and our individual research reinforced its reality. Although we were well-prepared, the impact of seeing it firsthand was still striking. A sea of shanties became visible shortly after we got on the highway toward downtown. It was impossible to ignore and difficult to fathom the contrasting sight of lush green golf courses mere miles away on the opposite side of the road. Had it not been for the 25-minute drive into downtown Cape Town, it occurred to me that our hotel and the surrounding area could have blended into nearly any major U.S. city.

Shortly after arriving and checking into our hotel, we ventured off to the waterfront for a large group dinner. After a successful dinner and retreat back to the hotel, things began to go south (pardon the pun). I woke up in the early morning hours and instantly knew I was in trouble. Body aches, cold shivers and a rumbling stomach meant I was on the brink of a painful few days. I spent the rest of the night squirming and searching for elusive warmth in a cold, unfamiliar bed, humbled by the physical reminder that I was a guest in a developing country.

The next morning was rough. Despite feeling like a train wreck, our meeting with Zakhele Mbhele, a member of the South African Parliament, was one of the highlights of the trip. I wish my parents could have heard Zakhele speak. As self-described libertarians, I know they would have loved listening to his free-market, minimize-government political stance. In a country that traditionally relies upon the government to provide for its people, Zakhele’s political views were not only refreshing, but seemingly against the norm. I wanted to ask, “Does everyone in politics think you’re a radical nut-job?” Instead, I used slightly more delicate language to ask him a similar question, which he answered honestly, albeit tactfully.

Over the next two days, I tried to maintain control of my bodily functions and muster enough energy to visit various technology and finance companies—each seemingly more impressive than the next. In particular, Jumo and 2U had dynamic business models and cultures reminiscent of those in Silicon Valley, yet these companies were thriving on a continent with a fraction of U.S. wealth. The companies we visited all demonstrated a passion for working together, blending life and work and creating a challenging, yet rewarding atmosphere for their employees. I considered what it would be like to work in such a dynamic culture.

I was finally able to enjoy my first meal on what was also my favorite day of the trip. Throughout the prior quarter, our reading assignments emphasized the ingenuity of the African people and their desire to improve the lives of their fellow men. These academic concepts came to life at RLabs and Velokhaya, two organizations that embodied that enthusiasm and captivating spirit. A visit to Khayelitsha allowed me to see an impoverished area of Cape Town up close, which was not without its challenges.

My trip to South Africa provided a number of takeaways—and questions. First, a reflection on passion. At my church in Denver, we frequently discuss the importance of being a passionate people. As an analytical, problem-solving American, passion does not come naturally to me. At RLabs, we were asked to ponder the question, “What are you passionate about?” It occurs to me that this is a topic worthy of continued consideration. I do want to be a passionate person and would like to direct that emotional energy in a way that makes this world a better place. However, simply creating a passion for its own sake strikes me as inauthentic and short-lived.

In all my travels abroad, I’ve wrestled with the recurring theme of American exceptionalism. As the most influential country in the world, we often believe we have it all figured out and that our country’s operations are superior to the rest of the globe. I am always delivered a healthy dose of humble pie when I travel and meet people outside the U.S. Even in a developing country like South Africa, I was struck by the talent and intelligence of the people I met. Throughout our visits to various Cape Town companies, each speaker demonstrated a remarkable level of knowledge and competency that would rival most American experts. America is an exceptional place—but in more of a “sum of the parts” way. Despite what many of us would like to think, we aren’t all uniquely exceptional people, and in many ways, we settle for less because we are not as driven as the rest of the world. It’s rare that I experience the passion I found at RLabs. It’s infrequent that I meet people as compassionate as those at Velokhaya. And to find people who love wine as much as my new friends at Villiera? Ok, scratch that last one. That’s more ubiquitous. In any event, these are the kinds of people who I aspire to be like. 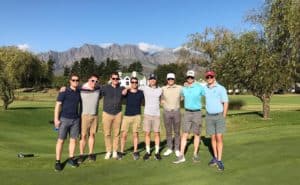 I was thankful to close out the week-long trip by playing the beautiful Erinvale golf course, followed by an evening at the Lourendale winery with several of my closest friends in the cohort. We laughed, we drank wine and we recapped everything we had seen and experienced.

This trip was a once-in-a-lifetime experience—stomach bug notwithstanding. But I left with more questions than answers, including a healthy dose of uncertainty regarding my next steps after business school. Although uncomfortable, I think sometimes it is all right not to have the answers and to wrestle with uncertainty. As I round out the last quarter of my MBA at Daniels, I look forward to continuing to tackle these challenges and to growing as a student and a human being. Thinking back to my mother’s words over a decade ago, I realize she was certainly right about being changed by Africa—she just didn’t tell me it could happen more than once.