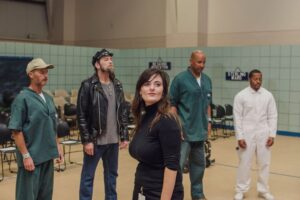 Ashley Hamilton is an assistant professor of theatre at the University of Denver. She’s also the executive director and co-founder of the DU Prison Arts Initiative (DU PAI). Since earning her PhD in Applied and Educational Theatre, she has found a passion for working with incarcerated men and women in innovative ways. During lockdowns due to COVID-19, she produced a virtual production with her students called “A/LIVE INSIDE.” Other notable productions include “One Flew Over the Cuckoo’s Nest” with Sterling Correctional Facility and “A Christmas Carol” with Denver Women’s Correctional Facility.

Can you tell us a little about yourself?

I’m actually from Denver. I was born here. I grew up both here and in Texas, because I had divorced parents. I went to CU Boulder for undergrad, where I studied acting. After undergrad I moved to New York City to pursue acting in New York more traditionally. I did that for a little while, but I started to grow restless. Through some serendipitous events, I found my way into the world of applied theatre and arts, and really fell in love with it. I started working in the prison and jail system about 10 years ago. That’s when I went back to graduate school to get my PhD, all the while working in the New York Department of Corrections, teaching educational classes and arts-based classes.

As I finished my PhD, I applied to the DU Department of Theatre. During interviews I emphasized my love of prison work — that’s where my heart was, and I couldn’t imagine not doing that. Everyone I interviewed with was really excited about that! So when I got here, I started laying the groundwork for the program. And that was almost four years ago, now.

Where do you think that passion for working with incarcerated folks comes from?

Gosh, that’s a hard question… it happened over time, I think. It’s hard to pinpoint the moment. Initially, when I first began, I didn’t have a strong connection to prison. So, my mind was pretty blown at the disconnect in the way that people inside are portrayed by the general public and in the media as compared to my firsthand experience with incarcerated people.

The folks that I’ve come to know inside are some of the smartest, most talented and often most reflective people that I know. I don’t think that’s talked about enough… I don’t say that to excuse harm in any way. But we need to hold both the harm and the humanity of these people. The current system is failing; it’s causing more harm and more problems rather than helping to fix things. I think at this point most people are in agreement about that. There aren’t many people that think, “Yeah, you know, the prison system is totally working!” I think people are aware that we have a problem.

I think for me, the heart of this work is in the way we can use the arts to humanize people inside and create more healing, so more harm can be prevented in the future.

What about DU PAI is innovative in how it works with people inside?

Our program is very co-intentional. I don’t live in prison; I’ve never been incarcerated. So we’re leading this initiative together. I’m not an expert on what it means to live and work in prison. So I need to learn from folks inside, and we lead together. So that’s what is really unique about this program. It’s not a top-down process, you know, “you have to do what I say” or something like that. It’s very collaborative and much more co-intentional, and I think that’s pretty unique.

What does the future look like for DU PAI?

With COVID-19, of course, we’re all being reactive to the current moment. But we have a lot less reactivity now than we did months ago, when everything was shut down. We have some pretty big plans for the future… At this point, I think there’s this feeling that the worst is behind us. So how can we get back to normalcy?

Our plans revolve mostly around film and radio. We hope, eventually, of course, to get back to those big productions, hundreds of people coming to the facility to watch. But I don’t feel like we’re being whipped around now like we were before. We have a terrific relationship with the Department of Corrections, and we’ve been very explicit with each other about where we’d like this work to keep going.

That’s a big part of this work, too, having that really strong relationship with stakeholders. Not just our students, but the prison staff, the facility managers and so on.

Where do the arts come into play?

They help us not feel as alone. Storytelling makes us feel connected, which is a very foundational part of being alive — we just want to feel connected. I think the arts give both me and my students that space to be connected, to reflect on the human experience… They also create a very beautiful sense of community, and they give you this ability to reflect on who you are, who you have been and where you want to go. I think that goes hand-in-hand with prison.

The arts also allow for people to portray their humanity in an external way. And that’s so important. The world needs people who can dream up new possibilities… when it comes to creating, or entrepreneurship. One of the greatest things about being alive is the ability to think up new possibilities and to make them real. So I am cheering on anyone doing that in service of the greater good!

To learn more about the DU Prison Arts Initiative, visit the DU PAI website and check out Hamilton’s podcast With(in), co-hosted and produced by incarcerated people in Colorado. 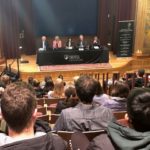