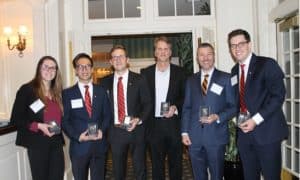 For the second year in a row, a group of Daniels students won the Annual Chartered Financial Analyst (CFA) Institute Research Challenge-Colorado Competition. The competition—now in its ninth year—provides thousands of students from universities worldwide with hands-on mentoring and intensive training in financial analysis.

“I am proud of this team,” said Wombwell. “They put in a lot of long hours and hard work.”

Students work in teams to research and analyze a publicly traded company. This year’s subject company was Liberty Global. While headquartered in Denver, Liberty Global provides video, broadband internet, fixed-line telephony, mobile, and other communications services to residential customers and businesses in Europe.

“This year’s team is extremely strong, talented and hard-working,” Tremblay said. “They produced a world-class research report on a very complex company. I have the highest hopes and confidence in their continued success at the next level of the competition.”

The team will head to Boston for the Americas Regional Finals on March 19 where they will face local winners from all over North and South America. Should the team emerge victorious at the regionals, they would attend the Global Finals in Kuala Lumpur, Malaysia, in April.