Lauren Yeates (MBA 2017) thought she would spend her career climbing the corporate ladder. Instead, she built two companies from the ground up. 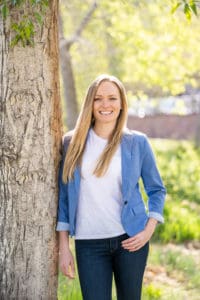 Yeates was almost halfway through Daniels’ Professional MBA program when she left her job in the corporate world to launch a digital marketing strategy firm, Wild Strawberry. Then, after graduation, Yeates and her husband Scott embarked on another entrepreneurial venture. The couple opened Mythology Distillery—a Denver-based distillery and cocktail bar—in 2018.

“About three years ago, Scott went on a skiing trip to Alaska with some friends and they got snowed in. The only thing to do in town was go to the distillery, so they hung out there and Scott thought, ‘We could start this in Denver,’” Yeates said.

The couple spent the next three years investing in infrastructure, operations, marketing, production and personnel, before opening Mythology in Denver’s Lower Highlands neighborhood.

When asked how her experience at Daniels helped her launch and manage not one but two businesses, Yeates said, “[Adjunct Professors] Chaun Powell and Bud Bilanich were both very entrepreneurial. And there was just a lot of focus throughout the program on entrepreneurship, even if you were in a corporate environment, you learned how to be an entrepreneur within that corporate environment. [The program also taught me] to invest in people, which we’ve done at Mythology.” 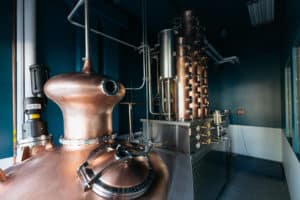 Yeates explained that one of the biggest challenges starting the distillery has been the unknown. “Scott has a real estate background and I’ve been in financial services and marketing. Neither of us came from the service or trade industry,” she said. But the fruits of their labor seem to make it all worthwhile. “It’s been wonderful to see what’s come out of this,” Yeates said. “We’re now producing three spirits. A blended whiskey, a rye vodka and a rum. And to see that product and to see people try our product and enjoy it, it’s just so phenomenal.”

Yeates is also proud of the company’s focus on sustainability and supporting local business. “We get our grains for our rye vodka locally and we’re partnering with an organization to compost waste. Our plates are made out of compostable bamboo, so we have a closed loop system,” she said.

Speaking of a closed loop, the PMBA alum is hosting a Daniels alumni and graduate student mixer at Mythology this Tuesday, March 5, from 4:30-7:30 p.m. “When I was deciding which [MBA] program to choose, I went to a [Daniels] networking event at a bar downtown,” Yeates said. “So, I thought, why not host an event [at Mythology]?”

For more information about the event, or to RSVP, visit the registration page.