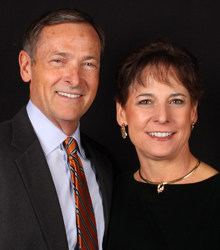 For many years, Mark (BSBA 1975) and Polly Lestikow have supported the University of Denver through their Lestikow Family Endowed Scholarship for Female Athletes and their involvement with the DU Alumni Association (Mark served as president from 1984-1985). In 2009, the Lestikows were approached by Daniels Dean Christine Riordan about getting more involved with the Daniels College of Business. “The College’s outreach was important to us,” says Mark, CEO of Closet Factory, which he started in 1992. “We’re big believers in asking for the things you want, and Daniels did that. That got us re-engaged with the College.”

The Closet Factory became Daniels Corporate Partner in 2010—and they’re quick to note that their mutual relationship with Daniels has not just benefited the College, but their family and business, too. “The networking opportunities have been terrific,” says Polly. “Part of our jobs as business owners is to network and be a part of the community, because that leads us to more business. Getting involved with Daniels definitely has done that.” The Lestikows make a point to attend the Voices of Experience speaker series and receptions and young alumni networking events with their son, Doug, who earned his BSBA in finance in 2008.

Mark says that supporting his alma mater is a very personal goal. “When I was in high school, I received a scholarship that made it possible for me to go to the University of Denver, and going to DU really impacted my life,” he says. “DU and the city of Denver was a wonderful time and a life-changing experience; plus I met Polly. Early on, I wanted to give back so that others could be given an opportunity like the one that was given to me.”

After graduation, Mark started a career in sales and marketing and spent time in real estate franchising, the packaging industry and the audio publishing business. Polly, a 1975 graduate of Colorado State University, had a 20-year career as a dietitian. In 1992, Mark stepped into entrepreneurship and became a franchisee of Closet Factory, a custom closet and storage solution company.  “We turn chaos into order,” Mark says. As business boomed in the company’s first few years, Polly eventually joined him in 1998, becoming the top sales producer in the franchise network. Today, Polly leads the sales team—and Closet Factory Colorado is the largest Closet Factory franchise in the nation.

The Lestikows say they hope to get even more involved in DU and Daniels in the years to come. “Daniels is practicing what they preach, which is to get out there, meet other people and build relationships that are mutually beneficial,” Mark says. “We promote DU and Daniels to our friends with college-bound children because we know that at Daniels, they will be well prepared for the challenges that a career in business presents.”