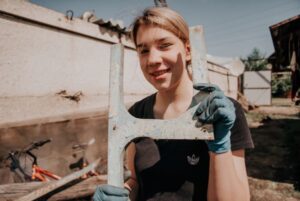 Approximately 5,885 miles west of Denver, nestled just below the Oglahty mountains in south Siberia, sits little Minusinsk, a Russian town that’s probably not on most people’s minds, but is certainly on the mind of Katerina Arzhayev.

Arzhayev (BA 2016, MS 2018) was born in Minusinsk but moved to the U.S. with her family when she was just 3 years old. She returned to her hometown when she was 18—thanks to a grant from the University of Denver to study the long-term effects of World War II—and when she did, it changed her life and her purpose.

“I went back to reconnect with relatives and do this research, and the first thing they tell me is, ‘There’s three men you can marry,’” Arzhayev said of the mentality she encountered there. “I was this 18-year-old feminist; I got upset. I was talking about equal rights and coloring my hair blue, and I realized that the new F-word was feminism. It was insane to me because I came from this expanded culture [in the U.S.], but Russia is about 10-15 years behind the U.S. in terms of feminism.”

That trip was the beginning of Girls Education Nation (GEN), the nonprofit Arzhayev started with her husband Ivan Utiakov, who also hails from Minusinsk and is, ironically, one of those three men her extended family had approved for her to marry. Seeing firsthand how women and girls in the remote region lacked opportunities and resources, the couple felt called to do something to help. At first, they sponsored Siberian students’ educations on their own and realized that their efforts made a huge impact, so they decided to formalize and expand their philanthropy to change even more lives.

“We realized that it made sense to continue what we were doing in an area that really matters to us,” Arzhayev said of concentrating on Minusinsk. “We didn’t want just broad economic development, so we decided to focus on education, specifically for women and girls.”

At an event organized by GEN, youth helped an elderly couple prepare for winter.

Late last year they officially registered GEN as a nonprofit and got to work investing in and uplifting current and future female entrepreneurs in Minusinsk. “Everyone’s an entrepreneur in that region,” she said. “You have to be an entrepreneur—you have to hustle.”

GEN currently operates five programs, loosely based on Maslow’s Hierarchy of Needs. Starting at the bottom of that pyramid, they provide the basics to survive, like food, housing and clothing, and then climb all the way up to self-actualization, giving women the tools to achieve financial independence and realize their full potential. Along the way, they provide grants and scholarships for high-potential students to get the education they wouldn’t otherwise get; help them learn English; provide one-on-one and group coaching; and create a mentorship network to assist with long-term professional and personal goals.

Arzhayev said that her time at DU was instrumental in planting the seeds for GEN. “Not only were the faculty and staff amazing but the students and their passion and desire were phenomenal in teaching me and showing me what the possibilities were,” Arzhayev said. “I have a lot of passion projects. I’m part of that hustle culture that America’s good at, and that I recognize from my own culture in Siberia.”

And hustle she has. In just a couple months, Arzhayev and Utiakov have already collected more than $20,000 in donations. (They don’t take a salary for their work.) “Our goal is to make sure almost all of that money goes to the people directly,” she said. “Even as we grow and the work expands, we’ll maintain that commitment that at least 80% of the money coming in goes directly into the pockets of the people.”

If you’d like to help, GEN is looking for Russian speakers to practice English with the Siberian women, people to help them develop financial literacy courses and other life-skill programming, and monetary donations. Or you can help by doing something as simple as liking and sharing the cause on social media to boost awareness of GEN’s efforts.

“It puts things in perspective,” Arzhayev said. “Just how fortunate we are here to have the opportunities to help people in other countries.”