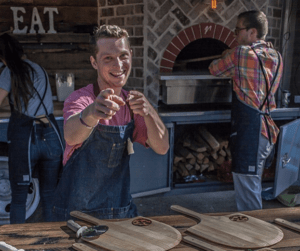 During the summer of his sophomore year at the University of Denver, Ryan McLean decided that he didn’t want a run-of-the-mill internship. He moved back to Minneapolis where he had the idea to start a pizza restaurant using the woodfire oven his mother had installed in their family’s home when he was 12 years old.

McLean called four of his best friends and convinced them to help him make pizzas on Thursday, Friday and Saturday nights. McLean, who was a finance major at DU at the time, handled the business side of things.

After launching a website, Lynnhurst Pizza Co-op, the precursor to Mountain Crust, had its grand opening. Technically, it was described as a party with free pizza; donations to defray the costs were accepted. This arrangement was due to the fact that the cooking was not in a commercial kitchen, and the food was served in McLean’s backyard.

After only their fourth night in business, the four friends, led by McLean, were making about 160 pizzas every night. The Lynnhurst Pizza Co-op became immensely popular, attracting customers from all over, with wait times frequently over an hour and a half long.

Lynnhurst attracted so much attention that Channel 4 News of Minneapolis came to run a story on it. However, during the process of vetting the company for the story, the health department shut down the restaurant due to lack of proper licensing.

“I knew that the proof of concept was pretty much there. I just needed to figure out a way to bring the same atmosphere and party to people all over,” McLean said.

McLean’s experience with Lynnhurst Pizza Co-op during the summer of his sophomore year at DU was a revelation: he could make money doing something he loves—throwing pizza parties with his friends. According to McLean, “You definitely don’t feel like you’re working if you love what you do.”

After doing some research, McLean found a company that would build any truck into a mobile restaurant. During his senior year at DU, McLean found a 1955 F-600 Ford truck for sale named “Ole Blue.” The truck would later become the heart of Mountain Crust. McLean bought Ole Blue in the fall and had it outfitted with a woodfire Mugnaini pizza oven and three taps. That process took about a year, and although McLean was in school at the time, he was building and was (almost obsessively) focused on Mountain Crust in his spare time. Ole Blue’s first party was McLean’s graduation party for over 250 people. This was the official start of Mountain Crust.

McLean initially funded Mountain crust with his own savings plus a few loans from some of his family members. He promised to repay them within two years and before paying himself anything.

“We’re just young people who like to have fun, and people have been recognizing that. We try to bring a unique atmosphere that people will really remember,” McLean said.

Mountain Crust has a few DU alums working for it as well as an intern from DU’s Fritz Knoebel School of Hospitality Management. Everyone who works at Mountain Crust is 25 years old or younger. McLean understands that these young, hardworking employees bring endless energy and a fun atmosphere to Mountain Crust pizza parties.

McLean shared that for him, “There’s nothing better than sitting around a fire and eating pizza.”

A typical Mountain Crust Pizza party involves the crew cooking everything right in front of their clients with no walls. Mountain Crust uses seven different sauces and more than 30 different ingredients. The company brings a full menu and full services to every catered party. Sustainability is also a very important part of Mountain Crust and the team does everything it can to eliminate waste and be as environmentally conscious as possible.

Although the entrepreneurship program at DU’s Daniels College of Business wasn’t fully established when McLean attended DU, Stephen Haag, director of entrepreneurship, has always been a huge support, inspiration and mentor for McLean and Mountain Crust. Also, McLean participated in Startup Week at DU, but with a different company. Although he ultimately decided not to pursue the other company, he feels that Startup Week was an inspiration for him as an entrepreneur.

Harnessing his inspiration, hard work and a love for pizza and good times, McLean has established the kind of startup that only passion can fuel.

“Ryan and Mountain Crust are examples of why I get up every day and do what I do at school,” explained Haag. “Seeing and helping young people chase their dreams—and ultimately succeed—is what the Daniels Entrepreneurship program is all about.”

McClean, who graduated in 2016 with a degree in finance, was so successful so quickly that he was able to repay his family members within 11 months.