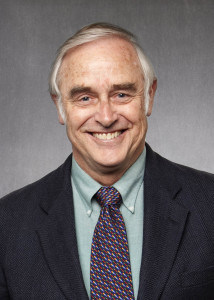 From training and consulting to teaching, research and publishing, Van Johnston did it all during his 39-year career at the University of Denver.

After completing his PhD at the University of Southern California, Johnston joined the Department of Management in 1976. In addition to teaching courses in management, public policy and administration, human resources, financial administration and budgeting, he started an energy management program and MBA to support the booming energy sector in the region.

Later, Johnston served as director of the intergovernmental management and professional management education programs. He was a senior faculty fellow of the College’s Center for Management Development and a regular trainer for the Beaumont Center for Management Development. Johnston served on the DU Faculty Senate and on the boards of numerous organizations, including two national academic councils.

Teaching was always his primary emphasis. “Over time, I began to see students as spectators, cheerleaders, performers and experts,” he said. “The goal became to move students up at least one of these dimensions, from spectator to cheerleader, from performer to expert.” The best part, he added, was facilitating the aha moments. “Watching students perform professionally as they finish their courses, and even beyond in the professional world, has always been a treat.”

For Johnston, DU is a family affair: His three children, David, Erik and Jacqueline all attended DU, accumulating nine degrees among them—most from Daniels and DU.

An avid researcher and scholar, Johnston wrote 200 manuscripts during his professorship and had dozens of them published in leading journals. His work also includes eight books/monographs, including “Entrepreneurial Management and Public Policy.”

His research interests include transportation policy and administration; energy and environment; performance, productivity and quality management; urban and private/public program management; and public-private cooperation and partnerships. Johnston published several symposia analyzing significant events such as the 9/11 terrorist attacks. He served on numerous academic editorial boards, was a co-editor of a premier journal in his field and edited a professional newsletter for a decade.

A former captain in the U.S. Air Force, Johnston was a distinguished visiting professor of management and strategy at the U.S. Air Force Academy from 1991 to 1993. He was involved in several professional organizations and held a variety of leadership positions in the American Society for Public Administration. Johnston also was a consultant and/or trainer for ITT Corp., Martin Marietta Corp., the U.S. Office of Personnel Management and other organizations.

Through the years, Johnston estimates he’s taught about 10,000 students. He’s proud to have contributed to the rise in quality and stature of Daniels and the development of students to become successful professionals.

“That is a significant part of the thrill of the position,” he said. “I’ve always felt a commitment to make sure students get as much out of their education as possible.”