Hi everyone!  I just got back from an amazing trip with 19 other Daniels students to meet the Oracle of Omaha (Warren Buffett) in his hometown, and I wanted to share the experience with you. 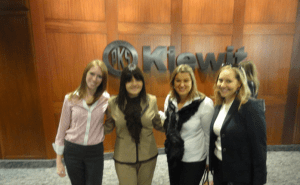 We began the festivities in Omaha with a welcome reception at a restaurant and brewery, where we got to know several Daniels alumni (we found out that there are 90 alumni living in the city!).  I chatted with two alums who worked at Union Pacific and one who had recently completed her undergraduate degree.  It was great to know that the Daniels family is incredibly kind, hospitable, and welcoming no matter where you go in the world.

The next day, we toured the Nebraska Furniture Mart (the largest furniture store in North America) and learned how it has become such a huge success.   The tour was given by the grandson of the founder, and his pride and dedication were evident as he walked us through the store.  He said that his #1 focus is on his customers, and that everything he does is driven by that guiding principle. 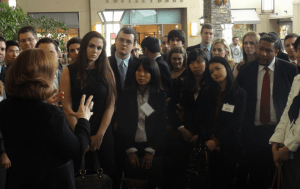 After leaving the Mart, we drove past Warren Buffett’s house, where he has lived since 1957.  Our bus driver told us that there was a flashing yellow light in Mr. Buffett’s front yard because he lived on the corner, and that there was rumored to be a squash court under the driveway. 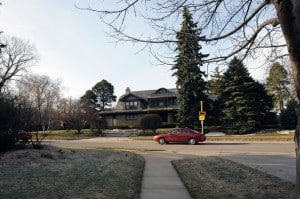 We then headed over to Mr. Buffett’s boardroom, where we were treated to a two-hour Q & A session with the Oracle himself.  Under the wise guidance of our chaperone, Patrick Orr, we landed a spot near the front of the room. The seats behind us quickly filled to the brim with 120 students from 6 different schools (who had come from as far away as Brazil).  We had spent the preceding week formulating questions to ask and voting on our favorites, and three Daniels students had the chance to address the winning questions to Mr. Buffett:

1. Mr. Buffett, given your breadth of experience and successes in a variety of sectors, can you please speak to the common traits and attributes that you have witnessed exhibited by the best leaders?
2. What is the most important thing in your life right now?
3.  In 10 years, what would you like people to say about you, and how does this align with your inner scorecard? 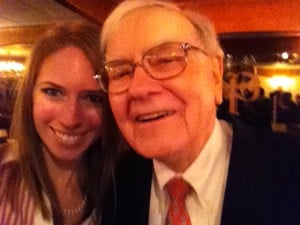 We had to take this picture twice. I’m not the most talented cell phone camera user!

After our Q & A, we took the bus over to Piccolo Pete’s, a local institution and one of Mr. Buffett’s favorite restaurants (he goes there at least once a week).  With Patrick’s help, six Daniels students had the honor of sitting at Mr. Buffett’s table, and we were treated to a variety of interesting and enlightening stories.  Mr. Buffett told us about movies that he had recently seen with his close friends, Bill and Melinda (of Microsoft fame), and about how he once learned to play the ukelele in an attempt to impress a girl. 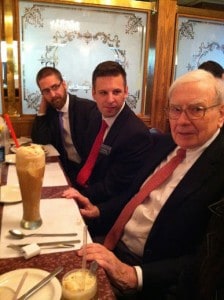 Mr. Buffett also pulled out his wallet to show us his golden McDonald’s card. He joked that he uses the card every Christmas to treat his family to dinner (at least I think he was kidding…)! 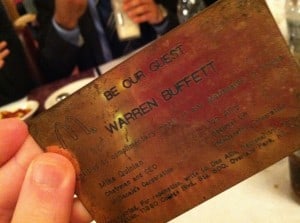 We then headed to the area under the restaurant’s famed disco ball to take a group photograph with all of the students from Daniels. 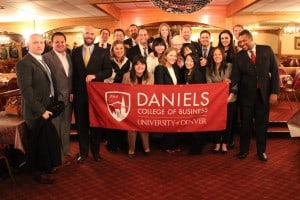 To conclude our trip, we went to Borsheims, a jewelry store which is owned by Berkshire Hathaway.  Mr. Buffett had told us about the store at lunch.  He said that during an annual shareholder’s meeting, he had been a jewelry salesman for a day, and that everyone had called him “Crazy Warren” for his low, low prices!  I tried on a 10.6 karat diamond ring and didn’t want to take it off, but the security guys were staring at me so I figured I should probably give it back. 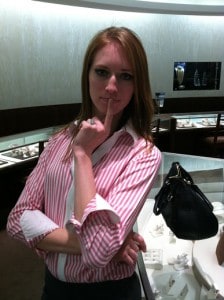 After our shopping extravaganza, we all piled back into the bus and went to the airport to fly home.  We were all sad that our trip was over, and were incredibly grateful to Daniels for giving us an experience that we will never forget!   Before I started my MBA at Daniels, I would NEVER have believed that I would even get the chance to see Warren Buffett — and two years later, I’m reveling in the memory of having had lunch with him. 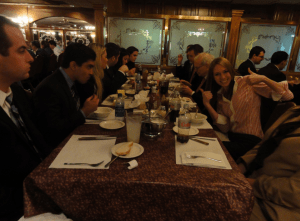 The Daniels Vision is “to be a premier private business college globally recognized as a leader whose educational experiences, outreach, and knowledge creation transforms lives…”  I can’t think of a more effective and exciting way to transform lives than by spending a day with the greatest investor and philanthropist of modern times.  Many thanks to the Daniels College of Business for giving me the trip of a lifetime!