The 5 Best Tips of Business as told by Erin Bosik 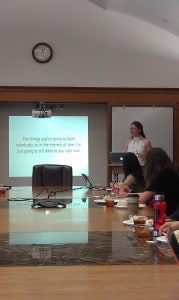 This week’s Lunch and Learn with Erin Bosik, content strategist, wasn’t just fun and provocative but also very helpful and insightful for inspiring business moguls. She broke down the harsh world of marketing and advertising in the following five easy tips:

Everything you do from writing a résumé to submitting a proposal counts in the cut-throat world of advertising and marketing.  So make sure you pay attention to the little things.

Bosik believes that everyone has the ability to be creative and the best ideas come from collaboration. Instead of thinking that client feedback is the most important thing, focus on what you and your team finds inspirational.

Advertising has the reputation of being very narcissistic because of the heart and soul workers pour into projects. However, your ideas won’t always be the best so don’t take it personal. Those who take it personal end up getting fired for acting like a big shot and refusing criticism.

What sets Erin Bosik a part from her competition as a freelancer is her ability to be nice. You want to be someone others want to be around; it’s all a people game. So what does Bosik recommend to do?

If your gut is telling you not to work at a certain place, trust it. Bosik has experience in working for companies she disliked and knew from the start she should have trusted her gut. She said “It’s easier to work for people you trust, respect, and admire so go somewhere that is right for you.” 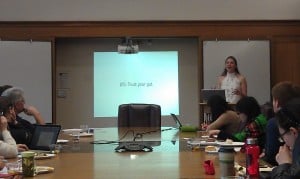 Bosik isn’t just an ordinary business leader but rather a personable and caring individual who truly enjoys her work and clients. For example, she sends out hand written thank you notes and Valentine’s gifts each year to her clients! Who wouldn’t love getting chocolates!? Unlike most stiff business people, she possesses a cheerful personality and quirky attitude that doesn’t let the little things bring her down. Despite her busy schedule and increasing demand, she even volunteered to edit résumés from those in attendance! That’s just one of the many things that make her stand out from others.

Before starting up her own freelance agency, Bosik worked at prestigious firms like Leo Burnett and Sterling-Rice Group. Her work includes advertisements for Rocky Mountain Cancer Centers, LiveWell Colorado, Metro Crisis Line, Weber Grills, and countless other creative campaigns which can be viewed here.

Come back soon Erin and expect a lot of résumés!