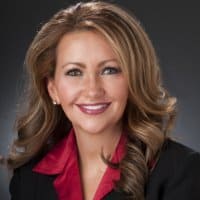 Metal versus plastic was a recurring theme in a discussion earlier this month with Kathleen Pitre, vice president of communications and corporate relations at Ball Corporation. Pitre spoke to students as part of the speaker series for the Business & Society course.

“Shameless plug for metal packaging: don’t ever throw a can away!” Pitre said. “I’ve got a whole bunch of cans rolling around in the back of my car. I’ve been known to pick cans out of the trash can in the convenience store.” The 137-year-old Ball used to produce plastic bottles and glass jars. Today the company is focused on metal packaging in part because of the outstanding sustainability credentials of the can. While plastic bottles deteriorate after each use, metal cans can be used over and over again with no loss of quality. As Pitre noted, 75 percent of all aluminum ever created is still in use today.

With its headquarters in Broomfield, Colorado, Ball has three primary branches of business: beverage cans (it manufactures one-third of the world’s cans), food & aerosol cans and aerospace. While these areas may seem disparate, they are in fact more aligned than one might think.

“We have a philosophy for how we do business more than we focus on a particular product line. And that really underpins our sustainability strategy and our corporate citizenship strategy,” Pitre said. It is Ball’s focus on social responsibility, rather than a specific market segment that drives its strategic decisions. The company uses a triple bottom line approach to its business model, focusing on profitability, the environment and the social consequences of its work.

Ball has four areas of corporate citizenship: recycling; education with an emphasis on STEM (science, technology, engineering and math); food security; and disaster relief. While many companies send aid after a major catastrophe occurs, Ball anticipates it. “We’re proactively knowing disasters are going to happen, so what can we do as a company to have communities be prepared for those disasters?” Pitre asked.

Perhaps Ball’s most impactful contribution is providing millions of cans of drinking water prior to a major devastation. “We do that in advance, because if you wait, it’s too late,” Pitre explained. This kind of preemptive planning helps offer peace of mind and has tremendous financial benefits as well: Studies show that every dollar donated before a tragedy is worth between $4 and $10 if it had been donated after the fact.

Colorado’s 2013 floods help serve as a catalyst for Ball’s proactive planning. After seeing the harrowing effects of the storm throughout the state, Ball decided to help in future disasters. The company knew it had an invaluable commodity to offer to people in need: the can. Aluminum cans’ long shelf lives lend themselves to ideal contributions to community preparation for disasters. Because cans are lightweight and easy to pack, Ball can maximize the amount of clean drinking water and food products that are delivered to those who need them.

While Ball remains focused on disaster relief, it is also working to improve recycling practices on a global scale. The company has developed partnerships with non-governmental organizations, such as the World Wildlife Fund for Nature and the Recycling Partnership, in an effort to promote recycling. A recent study of people who had access to curbside recycling in the city of Denver found that, around half of cans were put in the trash rather than the recycling bin.

“We’ve decided if we’re not going to do this, who is?” Pitre said. “And so we’ve made it a major initiative at Ball to work with our suppliers and our customers and get more metal recovered.”