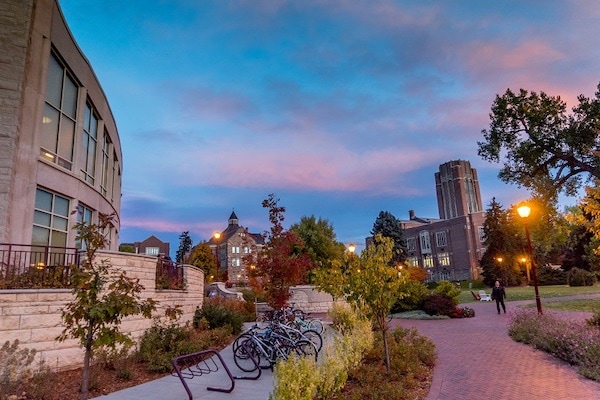 Just a few months ago, Emily Huff was simply a first-year student in the Daniels of College of Business, enrolled in the Fourth Industrial Revolution, a hands-on introductory course aimed at preparing potential entrepreneurs for today’s fast-moving marketplace.

These days, Huff is still a first-year student. But now she’s on the cusp of marketing a product that could dramatically impact public safety on college campuses across the country.

Buddy Bandz are devices, much the shape and size of key fobs, that give users a way to combat sexual assault by connecting with Campus Safety or other emergency contacts at the push of a button. Huff and her classmates, fellow first-year students Anna Perleberg and Em Profeta, developed a prototype as an assignment in the fall.

“There are ways you can prevent [sexual assaults on campus],” Huff said in December, as she and her team showed off their product at the quarterly Madden Challenge competition. “We feel like it’s really important to continue [this work], even after the [class] project is over.”

Jim Ducay felt the same way. The adjunct professor was walking through the Madden Challenge that night, on the lookout for projects with potential. He immediately saw an opportunity to develop the Buddy Bandz idea further.

Ducay oversees the new Xperiences courses offered since the fall by DU’s Project X-ITE, a cross-disciplinary program to launch and nurture startup-focused entrepreneurs. The courses allow students to work directly with companies to bring industry-impacting products to market.

“What we saw in the Buddy Bandz booth was just their desire and recognition of a need for personal safety,” Ducay said. “The projects that come under the Xperiences program are really driven by people who have a desire to make a difference.”

As it happened, one of the Xperiences classes was partnering with the California-based tech giant Hitachi Ventara. The firm had already been trying to develop an application to keep students safe on campus. Huff’s idea complemented their efforts perfectly.

The Buddy Bandz fob offers students three levels of protection. A Level 0 alert can let Campus Safety know a student’s location at any given moment, say, when they leave an event to head home. A Level 1 alert sends a text to an emergency contact — perhaps a friend or resident advisor — that registers and then tracks the student’s location. In the most dire of situations, a Level 2 alert directly dispatches campus security to a student’s location.

“From our very first meeting, I was incredibly excited because Emily and the Buddy Bandz team were able to push our way of thinking and give us new ideas immediately,” said Evan O’Dowd, a senior in the Xperiences class. Before learning about Buddy Bandz, his team had been working to develop an application with similar goals. “It was great to get these new voices and new perspectives in,” he added.

From the beginning, the Xperiences class brought in DU’s Division of Campus Safety to help make the idea a reality. Matt Ulrich, a support specialist in the division, has been meeting regularly with the student team, advising on ways to make their product useful on campuses and smart cities across the country.

He was impressed from the outset by the idea itself, but also the team’s commitment to partnership, attention to detail and concern for student privacy.

“I think a product like this can make a huge difference, not only for the people directly using it, but for the entire cultural shift that could follow,” he said. “I see this as another tool students can use to be empowered and help keep themselves and others safe.”

Since February, when DU students started publishing accounts of campus sexual assault on the @wecanDUbetter Instagram account, Huff has realized her team can be part of something even larger than she initially imagined.

“Having this [account] that’s shedding light on the dangers that might come with being a DU student and a college student in general, it does beg the question, ‘What is the University doing about it?’” Huff said. “We really feel like our product can be part of that solution.”

Before DU moved classes online in response to the coronavirus outbreak, the Buddy Bandz team created focus groups and hoped to test the device on campus during spring quarter. Until students return, the Xperiences class is holding Zoom meetings to keep the wheels turning. Huff’s end goal is to give each incoming first-year student a device.

The speed with which her idea has come to life remains hard for Huff to believe. She credits her team, mentors at Project X-ITE and the professor whose Fourth Industrial Revolution class started it all.

That professor, Stephen Haag, is quick to offer some praise of his own.

“Some people might expect me to be surprised that a team of young students can move so quickly from the classroom to the marketplace,” Haag said. “But I’m not at all surprised. Emily and her team are amazing young people, destined to reshape the landscape of business. I’m very, very proud to have been a small part of that. They deserve all the credit.” 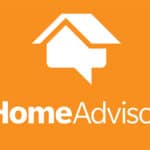 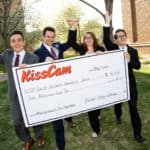