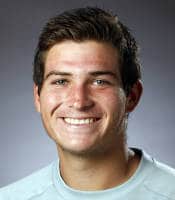 In addition to goalkeeping on the Men’s soccer team, Mate is a Daniels Fund Scholar, and he plans on majoring in Marketing with a minor in Business Ethics and Legal Studies. Mate’s involvement with DU and its athletics program has been long and ongoing; he got his start working as a ball boy for the soccer team as a youth. Later, he played in DU’s junior hockey program, and went on to become captain of his high school soccer team before continuing his soccer career on the University of Denver Men’s team. Not only involved in athletics, Mate has also served on the executive board for the ALMA Hispanic Club and volunteers at a food bank and at DU’s Project Homeless Connect. We look forward to seeing more awesome contributions from this Daniels student athlete!

Do you know an awesome DCB Student Athlete who we should feature? Comment and let us know!