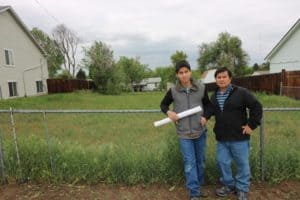 Ben Barco wasn’t born on a construction site, but sometimes it seems that way. He watched his dad buy and flip properties for as long as he can remember.

“I was that little kid on the construction site, cleaning up trash,” Barco said. “I worked with [my dad] from a ridiculously young age.”

It’s the reason Barco wanted to attend DU. He was only interested in the Franklin L. Burns School of Real Estate and Construction Management. In fact, DU was the only university he applied to.

“If I didn’t get in, I thought I’d just figure it out. But I got accepted, so I was super happy.”

Barco, 19, is now a second-year student in the program. He’s diving into his coursework and doing well. But when his dad bought a property in Englewood, it launched him into studying for something else: a contractor’s license.

See, Barco’s father, Benjamin Barco, purchased a property last fall that was an empty plot. In Englewood, if you want to build on the site, you need a licensed contractor to oversee the construction.

“I thought, how hard can it be?” Barco said.

Barco turned to Assistant Professor Eric Holt for help. Holt gave him books on the International Residential Code and Barco began studying. He needed to first pass a 4-hour exam in order to qualify to apply for a Class C license, which would allow him to oversee residential construction.

“Ben is willing to do whatever it takes to be successful in this industry,” Holt says. “Getting his contractor’s license this early in his career while balancing his college career is very impressive. I have only met two other college students who had their contractor’s licenses and they were both older grad students.”

Barco initially took the test in early March. He didn’t pass, missing by one point. He wasn’t discouraged. He went back two weeks later and passed.

“Ben is definitely one of the youngest residential contractors I have worked with in my four years with the City of Englewood,” said Jerry Brown, permit technician for the city. Brown explains that for general contractors, Englewood requires an ICC certification that matches the type of license they are needing. No age restriction applies as long as they have proof of having passed the test for the certification.

“He is very young but some kids grow up around the business and acquire quite a bit of construction knowledge and hands-on experience at an early age,” Brown said. “He is ahead of the curve by already having his ICC certification and contractor’s license, which go hand in hand with the degree he is working toward.”

“I am super excited,” Barco said.

Barco says what he learned was valuable. The code includes details on every aspect of building, things like how high windows and railings should be.

“You learn all the national standards,” he said. “It’s vital information because if you make a mistake, it can cost you thousands of dollars and delay the house.”

While he still has two more years of school, he’ll oversee construction on his dad’s property.

“It feels cool, like I’m finally stepping up to where I could be. I’m super excited to be working side by side with my dad.”