By Andrew Urbaczewski, chair and associate professor of the department of Business Information & Analytics 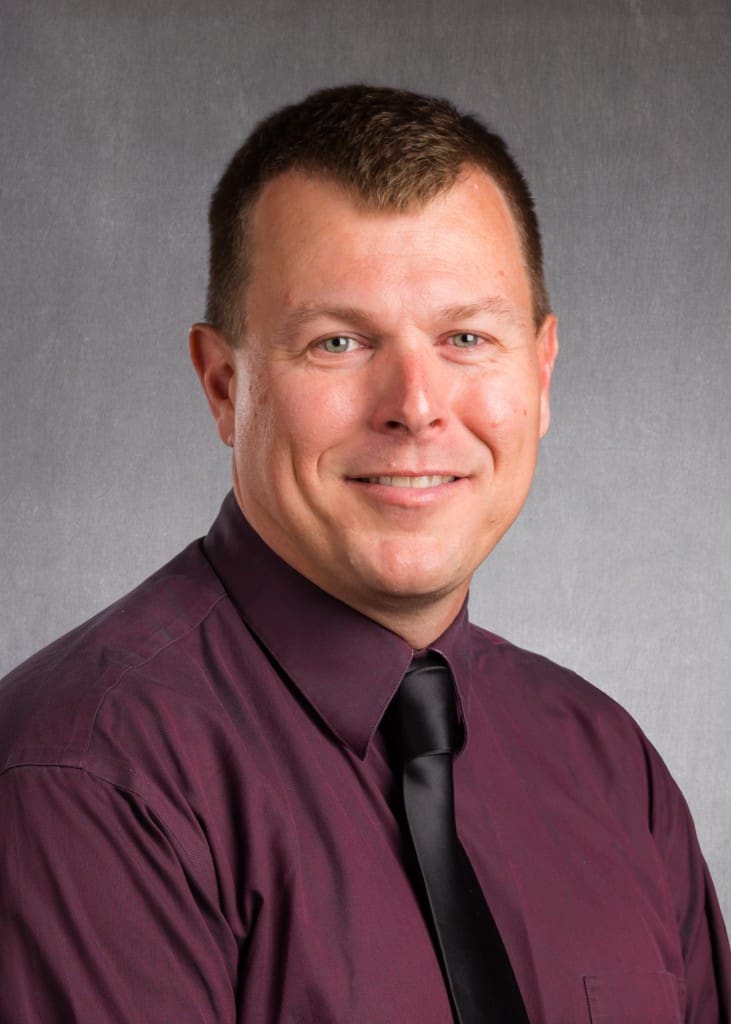 Did the people of Colorado do more for medical science in one day than trained researchers did in 5,000 years? Well, let me explain.

In November 2012, the voters of Colorado passed Amendment 64 to the state constitution, making it the first state in the union, along with Washington, to have legal marijuana for recreational purposes.  This was hailed as a revolution in the normalization of cannabis in the United States.  Since then, voters in Oregon, Alaska, Nevada, California, Massachusetts, and the District of Columbia have all joined Colorado as legal recreational marijuana (LRM) states, though not all currently have storefronts where one can purchase it.

Colorado was certainly not the first place in the US to sell marijuana since it was classified as a Schedule I substance by the DEA.  California approved marijuana sales for medical purposes in in 1996 through Proposition 215.  As of April 2017, 29 states and the District of Columbia have legalized the use of marijuana for medical purposes, making medical marijuana (MMJ) available in more states than not in the US.

Opponents of medical marijuana (MMJ) have stated that individuals claiming to need MMJ for hard-to-verify conditions, such as severe pain, nausea, and muscle spasms (together which account for over 100% of the conditions reported by MMJ users as they are allowed to report more than one condition) and other similar maladies were largely looking for a convenient excuse to obtain and use the product.  I personally witnessed on Venice Beach several years ago several storefronts advertising to individuals to come in and have a physician diagnose you with your malady and provide you with a card to obtain MMJ at a dispensary (medical retail storefront).  I particularly remember one individual who seemed highly under the influence of some mind-altering product holding a sign pointing to the doctor’s office while imploring passers-by to “Get legal, todayyyyyyyyyy”.  But I digress.

In Colorado, Amendment 20 was passed in November 2000 to allow for MMJ, and in June 2001 the state started accepting applications for registry cards to purchase MMJ. Applicants must be approved by the state and keep their registry cards updated by mail with a photocopy of a patient’s Colorado identification card. Initially, the number of Colorado MMJ card holders was quite low and those who did not grow their own MMJ obtained it through a caregiver model, where an individual caregiver could cultivate plants for up to five other patients. But the number of active MMJ cards dramatically increased in 2009-10 after a Colorado judge overturned the five patient limit, opening the door for large-scale commercial medical marijuana dispensaries throughout the state (source).

Examining data provided by the state of Colorado, we note the following:

While four of the dates shown were for data availability, the Dec 2013 date is shown as the last date before LRM was available for sale in Colorado.  Since then, MMJ cards have gone down in both relative and absolute numbers – as the state of Colorado has added about a half-million people in those 3.5 years, the number of active cards decreased by over 27,000.  Is LRM the reason for this?  It’s difficult to say.

The state of Colorado collects a significant amount of data on its registered MMJ citizens, but not nearly so much on LRM consumers.  Amendment 64 specifically prohibits the state from collecting any more data from LRM consumers that it would from those at liquor stores.  So just as citizens are free to purchase liquor from every liquor store in Colorado without it being reported, so are they from LRM stores (although they may run afoul of possession amount laws as a result.)  So we have to indirectly gather information about the size of the LRM market.

Dr. Paul Seaborn, an Assistant Professor of Management in Daniels and the author of the Colorado Marijuana Market Report, has done extensive analysis on licensing data in Colorado. In this report, he notes that the number of licenses in LRM has grown steadily and consistently since Jan 2014, while the number of medical licenses has declined in the past year.  In the meantime, sales of LRM have also steadily increased from $313.2 million in 2014 to $875 million in 2016 and $531.6 million in the first half of 2017.  Over that same time period, MMJ sales have stayed relatively steady from $385.9 million for 2014 to $437.8 million in 2016 and for the first half of 2017, $219.7 million (almost exactly half the 2016 number).

All this shift from MMJ sales to LRM is in spite of MMJ being far more economical to the consumer. LRM is one of the most heavily taxed products around, with a special 10% sales tax on LRM (increasing to 15% starting July 2017) as well as the normal 2.9% state sales tax and normal local sales taxes.  Cities and counties may choose to implement a special local sales tax on LRM on top of all these other taxes – in Denver it is another 3.5%.  Compare that tax rate with MMJ, which is only taxed at normal sales tax rates that one would pay if he or she were buying a fly swatter from Target.  This can mean in Colorado the difference between paying less than 7% and greater than 25% in sales taxes on the purchase.

So what is the reasoning for all these shifts in the market? Are Coloradans suddenly becoming cured of their illnesses?  Have they found other, cheaper forms of medication and therapy? Are tourists, who are free to purchase LRM but forbidden to purchase MMJ buying most of the billion dollars in pot sold in Colorado the past year? Did a desire for a safe, legal source of marijuana cause Coloradans to reluctantly seek MMJ cards prior to Amendment 64 and then abandon them once a non-medical, but even more expensive, option became available? Is the process of obtaining an MMJ card a big enough hassle that legitimate medical patients will pay more for LRM to avoid it?  Or is this all as simple as the voters simply legalizing a “medical” ruse that many pot consumers had been conducting through the years? It is difficult to put any causality into these numbers, but it certainly makes one wonder if a similar trend will be seen when LRM becomes available in California in 2018.  I hope that huckster on the Venice Beach boardwalk can find a new job… 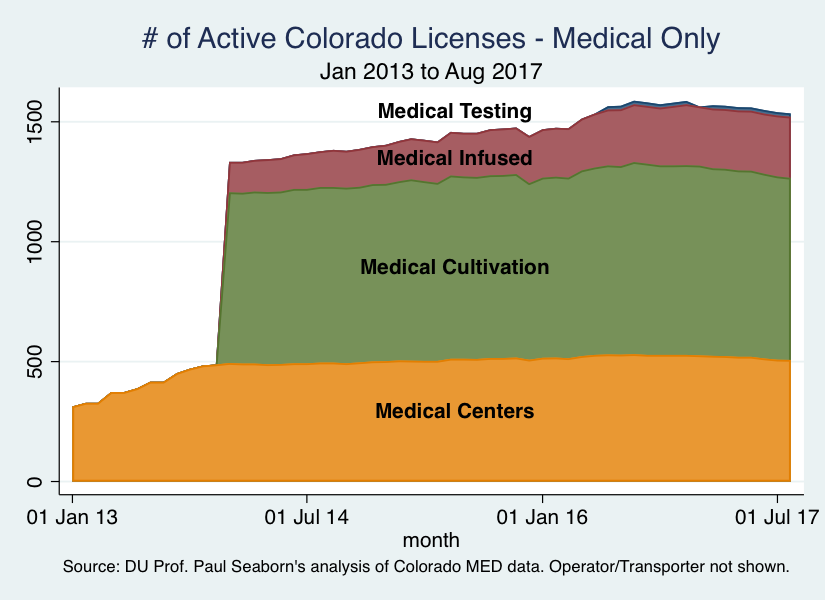 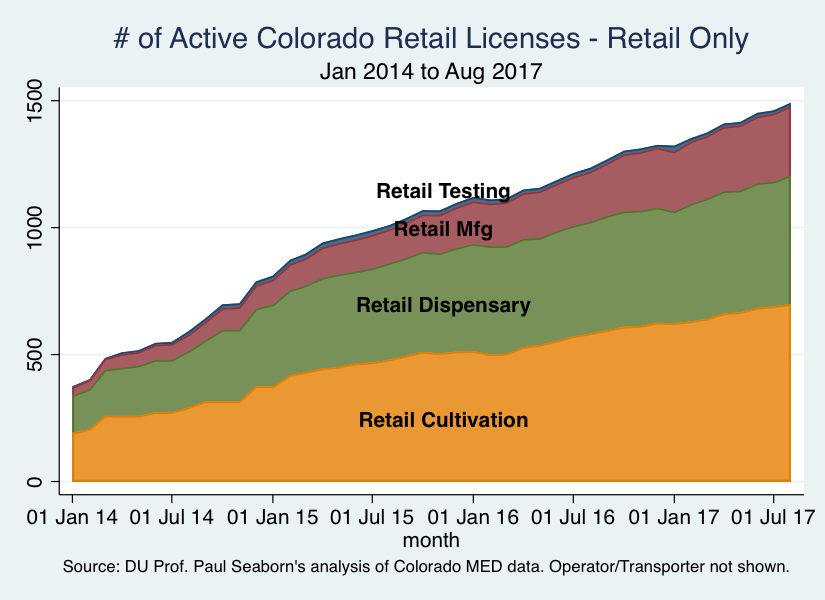