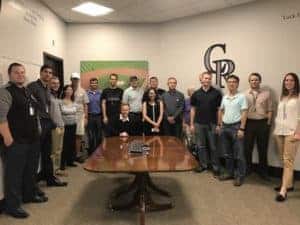 The Colorado Rockies’ Baseball Research and Development team–including Evan Eshleman (BSBA 2017)–invited members of Daniels’ BIA Department to get an inside look at their operations.

Springtime is here and that, of course, means the start of baseball season. In Colorado, for a quarter-century that has meant heading out to the corner of 20th and Blake in Denver, enjoying the ambiance and wondering if the Colorado Rockies’ pitching staff can somehow hold the opposition to less runs than the hitters are managing to score. In those 25 seasons, the Rockies have never won the National League West division and only rarely have managed to secure a wildcard berth. So recently, the Rockies have turned to analytics to help their on-the-field fortunes, and to do that have turned to DU for talent.

Evan Eshelman, a 2017 graduate of Daniels’ Business Information & Analytics program, was first an intern with the Colorado Rockies and then was hired as an analyst in the organization’s Baseball Research and Development department. Based at Coors Field, the department analyzes mountains of data on all aspects of the Rockies’ program as well as on competitors and prospects. The amount of data available in the last five years has exploded and dwarfs the previous 150 years. For example, positional data is now captured on the location of the ball and the players 30 times per second in all major league baseball stadiums—far more than the box scores of yesteryear.

Recently, Eshelman and Trevor Patch, director of Baseball Research and Development for the Rockies, invited several Daniels faculty members and researchers out to Coors Field for an inside look at their operations. While careful not to give away any secrets, they showed us their war room and their general strategies to help give the Rockies the best chance to win on any given night. They do not insert themselves into the managerial-player relationships, but rather, they help the baseball staff get the information needed for handling both macro- and micro-level situations when called upon.

In 2017, the Rockies earned a wildcard berth into the playoffs for only the fourth time ever and the first in a decade, so expectations are high for the coming season. Denver sports fans hope Eshelman and his colleagues continue to find the right algorithms to give the Rockies the best chances for success in 2018!