Our Own Western Hero 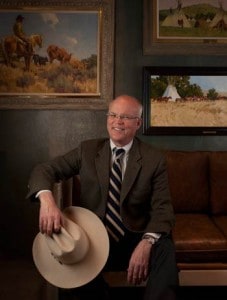 “He could be the poster child, the poster person, for a DU graduate.” -Dan Ritchie, Chair and CEO of The Denver Center for the Performing Arts and Chancellor of the University of Denver from 1989-2005.

From wrestling the ins and outs of the Denver National Western stock show to being the recipient of 2011 Founders Day Evans Award, Patrick Grant is a western hero. Grant received his MBA from the University of Denver in 1973 and has spent the past twenty years as the president of the Denver National Western Stock Show where he has taken his family ranching tradition to his own future. On November 1, 2010, Grant decided to transfer his authority to Paul Andrews and become part of a long-range planning group for the stock show. The group will work on determining the future for the stock show in seeking greener pastures and enabling opportunities for growth. During Grant’s time as the president he increased the reputation of stock show and took no responsibility attributing the success to everybody who was part of the stock show.