MBA for a Day 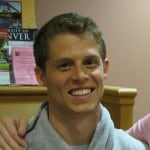 At the Lunch and Learn session I attended, I was encouraged by an IMBA student to see if I could attend a few classes with a current student.  Acting on this wonderful suggestion, I emailed Jared (the Daniels Ambassador I had met at my Accepted Student Dinner) to ask if I could shadow him.  Jared kindly obliged, and I had the opportunity to follow him around as an honorary MBA student for a day.

I was to meet Jared in the Student Services office, and on my way in I bumped into Soumontha Colwell-Chanthaphonh, the Assistant Director of Recruitment at Daniels.  Although I had only met her once, at the Accepted Student Dinner, she miraculously remembered my name!  I was awed by her memory (and will have to interview her some time to learn her mnemonic devices). 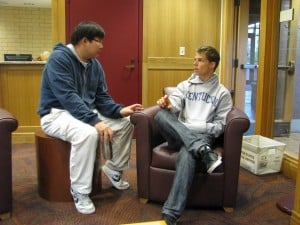 Meeting Jared and his friend in the Student Services office.

When Jared arrived, he greeted me warmly and described the classes we would be taking.  One of his friends walked in, and Jared introduced us to each other; Jared’s friend invited me to attend his Sustainability class with him later if I was interested.  After Jared and his friend talked for a few minutes, and I figured out how to use the official Daniels camera to document my experience, we walked to our first class, Organizational Dynamics. 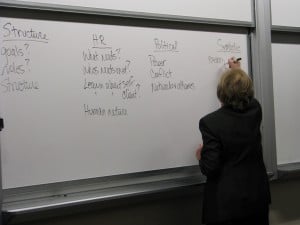 In Organizational Dynamics, we discussed case studies that the students had worked on for the entire quarter.  I had read on the Daniels website that “Daniels students get hands-on, highly-relevant business experience,” and I was not disappointed.  For their final project, the students had studied real-world companies and had designed programs to help solve the problems presented to them by their companies.  We gathered in the groups (which had been formed at the beginning of the quarter) and discussed what the students had learned from their case studies and from the group work process.  I felt privileged to be able to listen to the students’ experiences and to get an overview of the entire quarter.  The students were warm and kind, and one of the DGWiB leaders I had met at the Lunch and Learn was in the class!  As we were leaving, the professor thanked me for my questions and participation and said that she was looking forward to seeing me in the fall.  I could not have felt more welcomed and was excited to learn more about Organizational Dynamics. 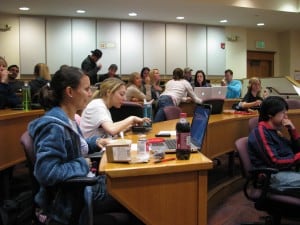 Preparing for elevator speeches in Sustainability.

My next class was Sustainability.  Similar to Organizational Dynamics, the class was centered on case studies that the students had worked on during the quarter.  However, instead of doing group discussions, the students performed “elevator speeches.”  Each group had two minutes to give an elevator speech about the company they studied and about what they would recommend to make the company a sustainable enterprise.  I could not help but laugh when one loquacious student was interrupted by the sound of an elevator “ding” made by another student.  Unfazed, the talkative fellow said that his elevator had gone up too far and now had to go back down!

After the elevator speeches, the students were prompted to share what they thought were the biggest challenges to promoting sustainability within enterprises.  The answers were fascinating and each one was different.  As I was leaving, the professor asked what my undergraduate major had been.  When I told her that I had studied communication, she was very encouraging and said that a communication major would be able to help promote a balanced perspective. 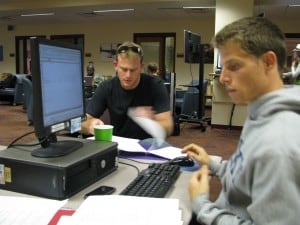 Working on homework in the computer center.

Jared met me after Sustainability and we spent a few minutes in the computer center.  While he worked on his homework, several of his classmates came up to say hi or to print out their assignments.  The atmosphere was convivial, friendly, and collaborative.  When Jared was done, we headed to his Financial Analysis class.  While the professor seemed interesting and hilarious, I had absolutely no idea what was going on (as the professor was reviewing the correct answers for the take-home final), so I only stayed for a few minutes.

After shadowing Jared, I had a few more questions, so he graciously met up with me at Daniels the next day to answer them.  Thanks to Jared’s patience and kindness, my anxiety and uncertainty about starting classes in the fall disappeared.  Every student I met during my “MBA for a Day” experience made me feel included, and the incredible professors welcomed me with open arms.  Even though I do not officially start at Daniels until September, I already feel like I belong.  The Daniels Vision of being a college “whose educational experiences, outreach, and knowledge creation transforms lives” is clearly being realized, one life at a time.