When I was researching student organizations at Daniels, I was thrilled to discover the existence of a group called Daniels Graduate Women in Business (DGWiB).  According to the Daniels website, DGWiB “provides a values-based network of women who advocate personal growth, leadership development, and future opportunities in the business community.”  Based on DGWiB’s Facebook page, this lofty goal is achieved through fun events with catchy titles like “Women & Wine, Boys & Beer.”  DGWiB sounded like my kind of organization, and I wanted to get involved as soon as I possibly could.

Although the academic year was quickly coming to a close, the DGWiB Facebook page announced that we were in the midst of “WELLNESS WEEK.”  A Lunch and Learn, hosted by Colleen Reilly of Total Well-Being, was to be held the next day in the Dean’s Dining Room.  I filled out the sign-up form immediately and eagerly checked the box that indicated my interest in joining DGWiB for the 2011-2012 school year.

The next day, I arrived at Daniels and eventually found the elusive Dean’s Dining Room.  I sat down and was surprised to notice that my neighbor was male.  He was a friendly IMBA student, and we struck up a conversation.  When he discovered that I was a future student, he suggested that I attend a few classes with a current student.  I thought his idea was brilliant, and when I went home I emailed Jared (a Daniels Ambassador I had met at the Accepted Student Dinner) to ask whether this would be a possibility.

After my discussion with the wise IMBA student, I met several members of DGWiB.  The ladies were thrilled to learn that I was a prospective member.  They introduced me to one of the DGWiB leaders for next year, who could not have been more inviting and enthusiastic.  We chatted for a few minutes, selected our box lunches, and settled in for the keynote speech.

The Lunch and Learn speaker, Colleen Reilly, was a vibrant Daniels alumna.  After her fascinating presentation about corporate wellness, a horde of eager women quickly surrounded her as she gathered her belongings.  She patiently answered questions, offered encouragement, and made suggestions to each student.  I was last in the receiving line, and asked her what she thought of pairing the Daniels MBA with a Master’s in Sports and Performance Psychology from DU’s School of Professional Psychology.  She told me that one of her former interns had completed both degrees, that she would be happy to coordinate an email introduction, and that she was sure that the intern would be thrilled to meet me for coffee to discuss the dual degree program.

I was so blown away by Ms. Reilly’s thoughtful offer, the DGWiB members’ friendliness, and the IMBA student’s ingenious advice that I began to scout the premises for a Candid Camera crew.  Then I remembered the information I had read on the Daniels website while I was preparing for my admissions interview.  The first value listed on The Daniels Value Statement is “community.”  My Lunch and Learn experience proved to me that the people of Daniels live by their Value Statement, and I was honored to have been embraced by the Daniels community. 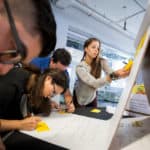 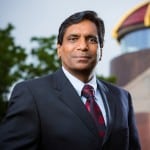