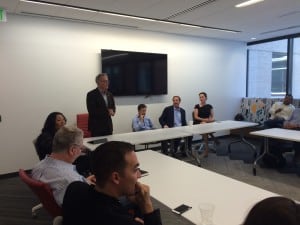 Denver and Israel have growing and vibrant startup environments which are ideal for investors, according to panelists at Denver Startup Week, the largest gathering of entrepreneurial energy, innovation and connection in North America.

“Israel and Colorado have similar market dynamics,” said Gold. He explained that the Denver/Boulder area has just as many tech startups per capita as Silicon Valley, but many fewer venture capitalists. It’s similar in Israel, where local capital is short compared to bigger areas like New York or Boston.

“You have to have the rule of law,” Gold said. “We assume that here, but most of the world does not have a strong rule of law. You also have to have a free market where the government stays out of the way and only interjects when the market is broken.”

Prostak shared that the Israeli government was very focused on how to inject new money into its economy.

“The recognized that they had to bring down the debt to gross domestic product (GDP) ratio,” Prostak said. “If the economy crumbles, then we won’t have the military infrastructure we need to defend ourselves.”

While Israel has succeeded in getting startups to thrive and big companies to stay in the country, the panelists felt Colorado should do more to keep major companies in the state.

“The reason Colorado needs big headquartered companies is because they acquire other companies and there is a steady flow of relationship DNA,” Gold said.

Another difference between Israel and Colorado is the availability of private capital. Prostak explained that Israel requires its citizens to contribute to their equivalent of our 401(k) accounts.

“The average Israeli household saves 10 percent of their income, whereas the average American household only saves 3 percent,” she said. “Companies understand what’s happening and want to stay in Israel where the most private capital is.”

The panel was moderated by Stephen Miller, senior director of DU’s Project X-ITE and of Entrepreneurship at the Daniels College of Business. Daniels organized the panels and several students attended this and other Startup Week events.

“Everything I’ve gone to has been very interesting,” said Jillian Stafford, a full-time MBA student. “You get a lot of value out of going. You also meet a number of people who are networking. There’s definitely a startup mentality going on.”