The Heart of the Valley: by David Duncan

On a sunny day in March, Instagram was on fire. Drew Barrymore, Reese Witherspoon, Cameron Diaz and their crew headed to Napa for the ultimate girls getaway–posting shots of the Valley’s lush vineyards and rolling green hills as they went along. After documenting a cooking class at the Culinary Institute of America, the ladies quietly made their way to Oakville’s Silver Oak Cellars. Vintner David Duncan didn’t even see them coming. We mean this in the very literal sense: Duncan was sadly off-site when the A-list crew made their impromptu visit. “I missed them!” he admits ruefully. “They were here when they were on vacation, but they were incredibly silent when they walked into the tasting room. We didn’t even know they were coming.”

Though the 48-year-old winemaker won’t reveal exactly what or how much the ladies purchased, let’s just say they left happy after a tour of the premises. And why shouldn’t they? Silver Oak Cellars is not only an award-winning winery, but it is also a perfect representation of what Cameron, Drew and Reese enjoyed on their trip: not only fine wine, but friendship. “Wine should be consumed with food and friends at a table,” Duncan maintains. “That’s really what we have focused on from the beginning – not making wines to win points, but for people to enjoy. ‘Life is a Cabernet’ is our slogan, and certainly for Silver Oak, that’s what we do. We work incredibly hard to follow our path to excellence. We don’t take ourselves too seriously, we try to make an excellent product that’s world class, and we realize that wine is really about fun and friends and family.”

Friendship is certainly part of the reason why the Silver Oak President and CEO and Twomey Cellars Managing Partner decided to co-chair this year’s Auction Napa Valley: he and wife Kary would be working alongside longtime pals Jeff and Valerie Gargiulo. “We’ve been active members [of Auction Napa Valley] for a long time; I’m on the board now. They’ve been asking us for years when we were going to host the auction, so it was a natural thing that we would need to do it. From a vintner’s perspective, I thought co-chairing would be a great experience,” he says. It also helps that he and Jeff are really close–they’re even in a band together. Along with Shane Soldinger of Crocker & Starr Wines, professional percussionist Joe Shotwell, Dan Zepponi of Valley of The Moon, winemaker Tres Goettings of Krupp Brothers Winery and wine-industry advisor Paul Hoffman, the men make up a group called the Silverado Pickups. For Duncan, who plays harmonica, guitar and is the band’s lead vocalist, the outfit is again, all about friendship and having fun.

“Jeff and I started playing together ten years ago. One thing led to another and now we have a core band. We’ve recorded a couple of songs, like ‘Wine Country Cowboy,’ which is on iTunes. We’ve done a lot of charitable stuff and have opened up for Tim McGraw and Leon Russell. It’s a good group of guys.” Though they have played at Napa’s BottleRock music festival alongside the likes of The Black Keys and the Kings of Leon, don’t expect Duncan to quit making wine in order to seek fame and fortune as a musician any time soon. “My wife has a wonderful way of keeping me grounded. She says, ‘Don’t quit your day job,’” he laughs.

An interesting choice of words, given that Duncan has held many different jobs in fields across the board, and has excelled at all. After receiving his undergraduate degree at the University of Notre Dame and his MBA at the University of Denver, he started working for his father Ray Duncan at Duncan Oil, where he rose from Exploration Manager to President in the 1990s. He then became a Board Member of Colorado’s First Western Trust Bank and Lead Director for Noodles & Company, a chain of restaurants based in Boulder, Colorado. He only ventured into the winemaking world when his father’s business partner, Silver Oak co-founder Justin Meyer, began to have health issues and decided to sell his share of the company. 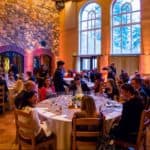