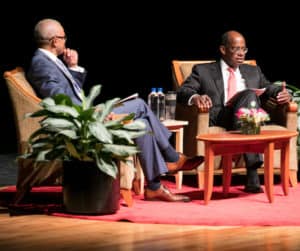 As if to prove his point that “you can’t be a leader if you don’t have followers,” TIAA CEO and President Roger Ferguson displayed his own masterful leadership by captivating a packed house of more than 500 at the Newman Center for the Performing Arts on Oct. 4.

The rapt audience seemed to hang on Ferguson’s every word during the frank and fascinating discussion—moderated by Daniels College of Business Dean Brent Chrite—which kicked off Daniels’ 2017 Voices of Experience speaker series. The conversation covered an eclectic range of topics, including the importance of financial literacy; traits needed for successful leadership; the value of diversity and inclusivity; and how to fulfill your aspirations. Ferguson peppered the evening with personal anecdotes about the origins of his passion for economics, his insights into TIAA as an organization, and what it was like to lead the U.S. Federal Reserve System following the terrorist attacks on 9/11.

Conrad Ciccotello, Daniels’ finance chair and director of the Reiman School of Finance, welcomed the audience, highlighting his own experiences with TIAA—as a client and a research fellow with the TIAA Institute. In his introduction of Chrite and Ferguson, Ciccotello noted, “Tonight we’ll have two leaders on stage whose organizations have a common ethos: Both [Daniels and TIAA] have a long track record of serving the greater good.”

Chrite began the discussion by asking Ferguson to explain his proclamation that he “has the best job in the world” at TIAA, which will celebrate its 100th anniversary in 2018. “We are a mission-driven organization. Our goal, our desire, our only purpose is to create great financial outcomes for individuals and institutions in the not-for-profit space with a primary focus on higher ed,” said Ferguson. “One of the things that makes it a great place to work is that it’s successful at its mission. For me, TIAA has become the centerpiece that brings together many threads of my career. It gives me a chance to exercise many of the muscles, many of the skills and many of the lessons I’ve learned.”

Prior to joining TIAA in 2008, Ferguson served as vice chairman of the Federal Reserve’s Board of Governors. A seminal moment in his career—and one that tested his mettle as a leader—came on 9/11 when, as the only governor in Washington, D.C., that day, all eyes turned to him to lead the Fed in the wake of the terrorist attacks. “It fell to me in the midst of the chaos—on the most traumatic day in American history—to help lead the team and decide what we were going to do to make the sure the tragedy didn’t spill over into an economy that was already weak,” he said. “We acted aggressively using various tools to provide enough liquidity to float the U.S. economy for three days. It was a moment that called for technical knowledge, leadership skills to get everyone aligned and the ability to communicate in a compelling manner.”

The experience solidified Ferguson’s conviction that successful leadership requires four skills to “incent followship. You can’t command loyalty and followship. You need expertise, vision—or the capacity to explain where you want to go—empathy and fortitude. The path isn’t always easy and people don’t want to follow someone who panics,” he said.

While he has had incredible professional and personal success—Ferguson serves on the boards of Alphabet and General Mills and chairs The Conference Board; he co-chairs the American Academy of Arts & Sciences’ Commission on the Future of Undergraduate Education; he served on the Council on Jobs and Competitiveness in the Obama administration; he is one of only five black executives in the U.S. currently leading a “Fortune 500” listed company; and he holds a BA, JD and a PhD in economics, all from Harvard University—he reminded the audience of the value of failure.

“Recognize that careers aren’t ladders, they’re rock climbing walls. You move to the right, you move to the left. You have a failure perhaps and you have to get on a different path,” Ferguson said, after recounting a mistake that set him back temporarily while on the track to partnership at McKinsey and Co., (he eventually made partner). “A failure isn’t a fail. It’s part of the process, it’s not the end of the process. Take accountability and figure out how you’re going to come back from it.”

Citing his mother and father as two of his biggest influences, Ferguson knew at a very early age that his career was going to center around economics and education. “My mother was a school teacher and for her, education was everything,” he said. “My father was a child of the Depression and he became very interested in banks and interest rates. He had me balancing a checkbook when I was in 7th grade. He would come home and talk about interest rates rather than sports. Consequently, I still know very little about sports.”

Daniels’ Voices of Experience speaker series—sponsored by US Bank—brings CEOs and significant leaders to DU and the surrounding community to share the lessons they have learned while navigating their careers. For more information about the series, visit daniels.du.edu/VOE.