When Christine Riordan four years ago took the helm as dean of the Daniels College of Business at the University of Denver, the school was not ranked on BusinessWeek’s prestigious list of the top business schools. Today, the school ranks 57th among 3,600 business schools nationwide and 13,000 worldwide. And Riordan is a rarity among business schools where only 17 percent are headed by a female dean.

“To go from not even being ranked to 57th is remarkable, and we always make the ‘hot university’ rankings,” said Riordan, who on her arrival led the charge to create a strategic plan for the school named for the cable pioneer. “We had not had a strategic plan since 2001 so we started with a retreat _ taking a look at what the problems were and what the opportunities were. Our plan took six months and involved 350 people.” Among the plan’s initiatives, the school created a class called Gateway to Business, which has been in the national spotlight for having students design an app, write a business plan and then pitch their idea to venture capitalists. “It’s a real hands-on application of going through the process of what it would take to start a business,” said Riordan, 47, who was associate dean for external relations at Texas Christian University before being recruited for the top spot at Daniels. 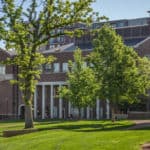