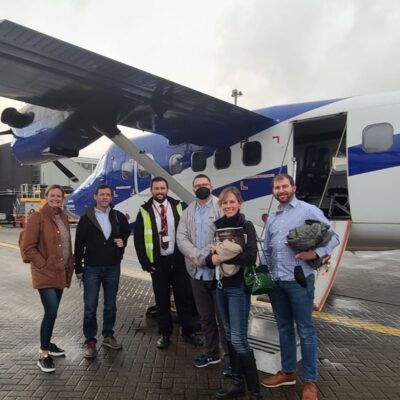 Before long, Skip Pribyl and three of his Executive MBA classmates expect to board a commercial airline flight on a fully electric aircraft.

Date? Unknown. Destination? A mystery. Is it even feasible? These are some of the things Pribyl and his group are trying to sort out.

Pribyl and his three colleagues chose fully electrically powered aircraft as the subject of their curriculum-required market feasibility study in the global business course (Quarter 5) of their 18-month program. The course included a November 2021 two-week trip to London and Edinburgh where they and 16 other Executive MBA (EMBA) candidates met with dozens of entities to further research and vet their studies, and get a taste of international business.

An international trip is a required component of the program and is intended to add a layer of complexity to the EMBA experience, according to Amanda Cahal, director of MBA Global Programs and adjunct faculty member at Daniels.

“The course also is integrative—it pulls in all of the different business functions plus culture, corporate social responsibility and sustainability,” she added. “The quarter on global business ties all of these pieces together and the trip, of course, is the highlight.” 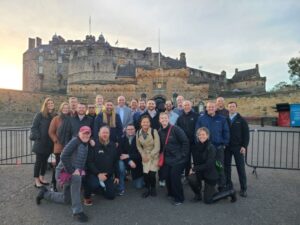 An uncommon feature of the program is that the students in each EMBA cohort vote on the destination for their international trip, which historically has included a developed market and a nearby emerging market.

“We typically spend a lot of time in southern Africa, Latin America, Middle East and Asia where it’s easier to see the economic and social contrasts between two distinct countries, such as South Africa and Mozambique,” Cahal said.

“With Covid still being a factor, we broke with tradition and instead went with two well-developed places, but our thinking was that we could create transformational experiences anywhere,” Cahal added.

The class had a full calendar, meeting daily with businesses, nonprofits and government entities to get a full picture of the local business environment. Entities included Sky, a British broadcaster and telecommunications company; Cloudflare, a web infrastructure and security with its EMEA headquarters in London; and Scottish Development International, Scotland’s trade and foreign direct investment agency, among many others. Each feasibility study group also had to set up its own meetings based on the study topic. 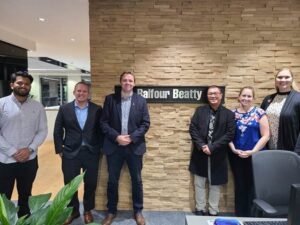 “Our study group set up six of our own meetings with aviation industry companies, including one in Sweden that we conducted by conference call,” said Pribyl, a flight instructor and pilot with United Airlines. “We were truly amazed at how willing these companies were to meet with us and commit such a high level of talent and expertise to our discussions.

“It was also interesting to see that companies are approaching the challenge very differently,” Pribyl added. “One company is pursuing hydrogen fuel cells while another is all in on lithium-ion batteries—literally a 180-degree difference. And one company is developing technology that can be used on existing planes while another is developing a new aircraft. It was fascinating to see those different perspectives as these companies vie for share in the same market.

“While we expected to—and did—hear about many of the technical and regulatory issues, we were surprised to hear so much about the human element of their work,” Pribyl concluded. “They were very focused on getting the right people and training them with the proper safety mindset. It wasn’t an area that we expected to hear much about.”

EMBA candidate Sarah Anderson and her group conducted their study on the feasibility of a US-based construction and engineering firm expanding into the UK market.

“We set up meetings with two top 10 UK engineering companies that also have a presence in the US,” said Anderson, resource and development manager in the Denver office of Kiewit, a large US construction and engineering firm. “The trip was very rewarding because we were able to confirm the legwork and research we put into our study—that what we thought was happening in the UK engineering market really was happening. We wouldn’t have gotten that confirmation unless we had taken the trip.”

Using some of the common British expressions they learned, Pribyl and Anderson were chuffed to bits (so pleased) with their journey. It was a bloody marvelous (fabulous) experience but left them both a bit knackered (exhausted).

Discover More About our MBAs