By Jon Stone University of Denver

For about two dozen students in DU’s Franklin L. Burns School of Real Estate and Construction Management, the summer will be spent directly applying what they have learned in the classroom in an unusual way. They will endure the hot weather as they construct a home that will compete in the U.S. Department of Energy’s Solar Decathlon competition.

“Being able to take our knowledge from the classroom and come out and actually build something feasible and physical, I think that’s where we actually connect the dots,” says Jack Ross, a graduate student in the Burns School. “It’s one thing to read it in a book, but to actually apply it on a job site that’s a school-sponsored project, it really takes the learning experience to the next level.”

“We are really good at engineering a design, at coming up with innovative ideas. But DU has a special aspect of construction management experience that we don’t have at our school,” says Ruth McGee, a civil engineering student at UC Berkeley. “I think bringing in DU has been the best thing we have done.”

A team of students from UC Berkeley was accepted into the competition in 2015. They then worked with other students, faculty, professionals and the city of Richmond, Calif. — where the house will eventually end up — on the structure’s concept. While the students are constructing only a one-floor single-family home, it is designed to have two more homes stacked on top of it. The house also features moveable walls, so the unit can transform from a one-bedroom to a two-bedroom unit, depending on the needs of the occupants.

“You can adjust the structure of the house to accommodate the way that it is stacked,” McGee says. “This is a concept design, and it’s a solution that we envision for Richmond. Our design will be open for them to use if they want to use this concept in the future.”

While the UC Berkeley team developed the idea for the home, it took the team from DU to make sure it could become a reality.

“The Burns School really prepares us to work hand-in-hand with the designer or architect and take their design and actually build it,” Ross says. “With our great construction real estate program, we were able to provide the knowledge to fill in the pieces where UC Berkley was unable to.”

The UC Berkeley/University of Denver team is one of 12 collegiate teams participating in the 2017 Solar Decathlon. The event takes place every two years, and this year the city of Denver is hosting the competition in early October. In addition to being powered by the sun, the homes will be judged on innovation, smart energy use, water use and re-use strategies, energy-efficient heating and cooling systems, and market potential.

Once the house is built and completely furnished on the DU campus, it will be disassembled and moved to the competition site at 61st and Peña Station. After the competition, the home will be taken apart one more time for transport to Richmond.

“Most of my college career has been spent working on this project,” McGee says. “It’s been a lot of work, and it’s been so rewarding in terms of every problem we encounter is a real-world problem, is a real thing that people have to come up with a solution for. For me it’s been really rewarding and exciting.” 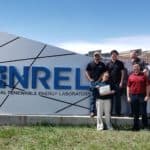 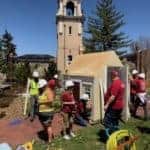 Playhouse Rocks
To paraphrase that iconic line from the movie “Field of Dreams,” “If you build it,… 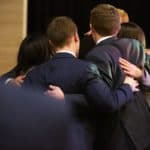 DU Wins NAIOP Competition by Engaging Globeville
The task: develop a plan to turn a 40.5-acre site in Denver’s Globeville neighborhood into…