I recently returned from Cape Town, South Africa, as part of the PMBA Global Business course. This trip and course were proof of the timeless paradox that the more I learn, the more I realize how much I don’t know. South Africa was full of surprises, mind-blowing and seemingly endless juxtapositions and valuable lessons—lessons I will take with me onto my continued journey as an entrepreneur, global citizen and student of life. 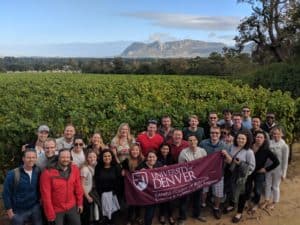 South Africa is both a stunningly beautiful and a stunningly complicated place. The sheer beauty and diversity of the landscape coupled with the modern feel of Cape Town is not something I was expecting, nor something I will soon forget. To be honest, I arrived in South Africa in a state of ignorance, loaded with preconceptions related to its political backdrop and dark history of apartheid. I was so preoccupied with its past political struggles that I was blindsided by its physical beauty—as if the two were somehow related, yet mutually exclusive.

I noticed a lot of juxtapositions, or “push-pull” factors. The “push” factors being efforts and policies enacted to move the nation forward and the “pull” factors being acknowledgments of, or nods to, the country’s relatively recent history of disenfranchising and oppressing millions of black and other non-white citizens. South Africa’s current unemployment rate hovers around a staggering 28%. In the agriculture industry, for example, farms and wineries could be far more profitable if they leveraged existing technology to mechanize and automate their production processes. But because of pressure from the government and a strong social responsibility—even duty—to employ as many workers as possible, the majority of farms and wineries continue to operate on slim margins or at a financial loss.

It was surreal to be in Cape Town—a city that rivals the beauty of any thriving western coastal metropolis—and fifteen minutes later, in the townships, which lack basic functioning infrastructure and are rife with gang violence. The contrast between eating the incredible food in Cape Town, then seeing a man in the township carrying a squawking, live chicken by its feet to its imminent slaughter to provide a meal for his family, was sobering and humbling. I remember the bus ride through the bustling, noisy and dusty Khayelitsha township being especially quiet. I think everyone was struck by this contrast.

It took being on the ground and talking to many native South Africans and business owners first-hand to fully grasp the implications and effects of the country’s apartheid laws—the system of institutionalized racial segregation enacted from 1948 through the early 1990s. Apartheid encouraged state repression of black African and other non-white South Africans for the benefit of the nation’s minority white population. To think that the white minority ruled and suppressed the black and non-white South Africans until well into the 90s, a time for me that was characterized by teeny-bop music, endless Saved by the Bell reruns, and inhaling Gushers like they were going out of style, absolutely blows my mind.

The economic legacy and social effects of apartheid continue to the present day. I learned that apartheid was frequently condemned by the United Nations and sparked an extensive arms and trade embargo on South Africa. During our meetings with South African business owners, it struck me that this country is playing catch-up in every aspect of governance. Most industries are relatively nascent, under-resourced, and getting by on second or third-rate infrastructure (while dealing with a drought and national energy crisis), while the government tries to make amends to the people who were oppressed for so long. What a tough job for any government.

To my surprise, most of the South Africans we talked to seemed focused on coming together as a nation. They spoke of the past in a factual, not emotional, context, and in a way that indicated they now are collectively working toward a better and brighter future for all. The white South Africans did not express resentment about policies like the Broad Based Black Economic Empowerment initiative, which aims to distribute wealth across a broad spectrum of the previously disadvantaged South African society. It is a form of affirmative action that is viewed as a major challenge to foreign companies wanting to do business in South Africa. Additionally, South Africa’s ruling party, the African National Congress, is aiming to change the constitution to allow for land expropriation without compensation to address racial disparities in land ownership. Perhaps most surprisingly, the black South Africans we met did not express resentment about enduring decades of institutionalized racism and oppression. 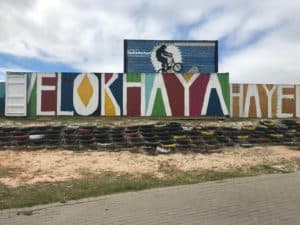 As an entrepreneur, I was especially moved and inspired by our visits to R-Labs and Velokhaya—two amazing nonprofits focused on engaging and educating South Africa’s at-risk youth in creative ways. They are revolutionizing education and opportunity for the marginalized communities from which they sprouted. Both organizations keep at-risk youth off the streets and away from the gang affiliation, crime and substance abuse that are prevalent in their communities. The meetings with these two organizations reminded me that the creativity and spark of the human spirit knows no bounds. Innovation doesn’t just happen in Silicon Valley; it happens everywhere. It happens in the midst of poverty and desolation and after decades of war and racism. Innovation doesn’t depend on race, class, status or wealth—everything begins with an idea or a dream, which is innovation’s only requirement. But I also wonder how many dreams have died in South Africa, how many dreams have failed due to the lack of access to education, financial resources and basic healthcare—things that entrepreneurs in many other countries take for granted.

I will never forget the moment I landed back in the U.S. after spending a week in South Africa. In the Minneapolis airport, I found myself surrounded by fast food restaurants (no live chickens here!) and by people who looked like me. We were people who have likely never had to worry about having water, electricity or where our next meal was coming from. There is something about the history and struggle of South Africa that gives its people a magical quality. They have been incredibly resilient and optimistic in the face of a decades-long struggle for equality and peace. These dynamic people now make up the vibrant, colorful and textured fabric of a country teeming with promise, dreams and innovation. I have no doubt that a better future belongs to South Africa. I can’t wait to go back.

Sarah Laughlin is a student in the Daniels Professional MBA program. She also is the CEO and founder of Slope Threads.