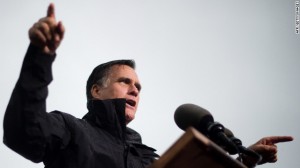 Washington (CNN) — For at least three undecided voters, both candidates left an impression during Wednesday’s debate.
Mitt Romney, they said, came to play. Barack Obama, they said, let them down.

Until late on October 3, Micheal Fazio, 41, of Las Vegas, leaned toward the president. But Obama’s “disinterested” performance in the debate in Denver left him concerned.

“As the president of the United States, I hate to say it, no rest for the weary,” said Fazio, who voted for Obama in 2008. “If he’s not sharp in the debate … what’s he going to be like behind closed doors?”

“I was impressed, as many people were with Mr. Romney’s debating skills,” Taylor said. “I thought the president for whatever reason was not on his game.”

But polls show Fazio and Taylor aren’t alone in their assessment of the candidates’ performances.

Unemployment rate below 8% a boon for Obama, but Romney says not enough.

According to a CNN/ORC International survey taken just after the debate, 67% of registered voters who watched the debate said that the Romney won the contest. One in four said Obama won the 90-minute event.

“No presidential candidate has topped 60% in that question since it was first asked in 1984,” says CNN Polling Director Keating Holland.
With the candidates neck-and-neck in national polls ahead of the debate, any edge is valuable, especially with undecided voters who make up somewhere between 3% and 8% of the electorate.