On Oct. 3 President Barack Obama goes head-to-head with his Republican opponent Mitt Romney in the first of three presidential debates only 34 days before the election.

The candidates face off at the University of Denver at 9 p.m. ET, where they will field questions about domestic policy issues for 90 minutes.

Jim Lehrer, host of NewsHour on PBS, will moderate the debate, which will be divided into six segments, each beginning with a new question and lasting 15 minutes. Obama and Romney will have two minutes to respond to the initial question. The rest of the segment will be used by the candidate to discuss the question’s topic.

Lehrer has been known to shake things up – when he moderated the 2008 Presidential debate at the University of Mississippi, it was supposed to focus on foreign policy, but he allotted significant time to discussing the financial crisis.

The University of Denver is a significant site because Colorado is a crucial swing state with nine electoral votes.

Historically, Colorado has been “deep red”- usually voting Republican. But Democrats have made inroads and Obama’s win in the last presidential election suggests Colorado has evolved into a purple state.

Obama received 54 percent of the popular vote in 2008, the most for any Democratic presidential candidate in more than 40 years.

The change in voter attitude may be because of the economic crisis.

“The heart of the problem for Colorado voters is the unwillingness of our leaders and candidate to tell us what it will really cost to fix our economy,” University of Denver business professor Buie Seawell said in a statement. 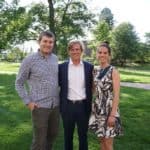