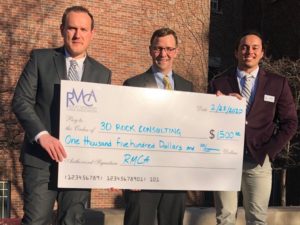 Their challenge: pitch a strategy for the launch of Peacock streaming TV

A graduate student team from the University of Denver’s Daniels College of Business will compete in the Rocky Mountain Cable Association’s (RMCA’s) 14th annual Cable Apprentice competition Friday, March 6, from 8:30 a.m. to 11:30 a.m. at Comedy Works South at The Landmark at Greenwood Village (5345 Landmark Place).

The teams are charged this year with pitching a successful strategy and launch for the upcoming Peacock streaming TV service from NBCUniversal from the point of view of the case protagonist, Chairman of Content Distribution for NBCUniversal Matt Bond.

Started in 2007, the RMCA annual event gives the DU students real-life, cable business case studies for intensive research and analysis. This is the first year the Cable Apprentice has been opened up to additional business schools after DU previously competed exclusively in the popular competition.

The teams will present their recommendations live in front of an all-star panel of pay TV executive judges including Jana Henthorn, CEO at The Cable Center, Bob James, VP, Content Acquisitions for NBCUniversal, and Roger Seiken, Senior Vice President of Programming at WOW! and an industry studio audience.

“The annual Cable Apprentice competition has grown since its inception in 2007 and has become the signature event for our 300+ member association,” says RMCA President Aaron Voss. “The RMCA is grateful to the Daniels Business College for its integral role in the historical growth of the competition. We are very pleased for the opportunity in 2020 to begin a ‘battle of the schools’ competition with UCD and UCCS joining the competition in the exciting and critical juncture in the evolution of the business of cable and pay television.”

In addition to the grand prize of $4,500 ($1,500 to each of the two other finalists), each member of the winning team will have a preferred opportunity for a local paid cable industry internship. Previous hiring companies included Charter Communications, Comcast, Sand Cherry Associates and Starz. Since its inception, many Cable Apprentice competitors have secured permanent jobs at area cable industry companies following successful internships.

Event admission is $35 for RMCA members, $85 for non-members and FREE for DU students. Registration is required.