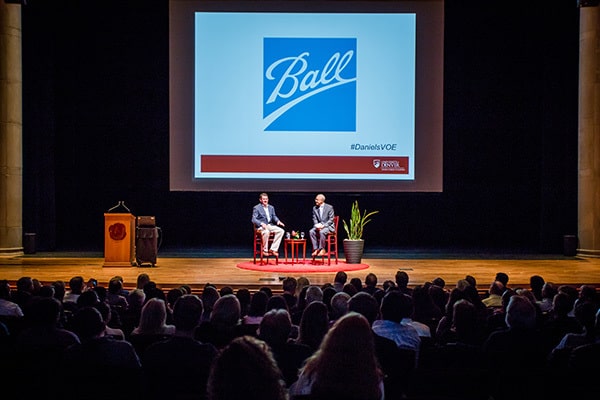 The Voices of Experience speaker series wrapped its 2015-2016 season on May 9, 2016, with John Hayes, chairman, president and CEO of Ball Corporation as the evening’s speaker.

Hayes shared his journey to Ball and his steadfast commitment to values-based leadership. An MBA graduate of the Kellogg Graduate School of Management at Northwestern University and an undergraduate alumnus of Colgate University, Hayes joined Ball in 1999 as senior director of corporate planning and development. Over time, he worked his way up into various leadership positions and led Ball Packaging Europe for a number of years. In 2011, Hayes was promoted to president and CEO, and in 2013, was also named Ball’s chairman.

Having spent most of his career at Ball, Hayes considers himself “one of the luckiest people in the world” to have landed at a company that engages its employees and offers them ample support to feel fulfilled and successful in their jobs. He joined the company after a few years with Lehman Brothers and as a research associate at Greenwich Associates. Ball, he says, gave him a sense of purpose that he had not felt before.

“At Ball, purpose isn’t a buzzword or a plaque on the wall,” Hayes said. “It’s a part of who we are.” Founded in 1880 by five brothers and a vision, Ball considers itself singularly focused on helping customers accomplish their missions through technical know-how, passion and innovation. With Hayes as its leader, putting others first is a Ball tenet—and Hayes strives to set the tone at the top. “I believe in loving what you do. I believe in putting the ‘we’ above the ‘me.’ And I truly believe in giving back more than you receive.”

As a leader, Hayes said that he has learned to rely on his core set of values—and those values guide his every decision. He shared five takeaways from his career with the Voices of Experience audience:

Find your passion. Hayes worked diligently during business school toward the dream he thought he wanted: to work in investment banking. But once he got to Lehman Brothers, he discovered that the job didn’t suit him. A serious jet ski accident that led to facial reconstructive surgery and two months of recovery was a turning point. “It caused me to think about my values system,” he said. “Life is too short to not find your passion.”

Put the team before the self. Admittedly a marginal high school student from a broken home, Hayes said that playing on the hockey team taught him everything about taking responsibility for his actions as well as selflessness and perseverance. “Because the team and not the individual is the ultimate champion.”

Character is everything. Hayes shared examples throughout history of those who feel entitled above others and act accordingly. “I’m here to tell you that ethics and humility matter,” he said. A lesson in character came early in his career—and from the most unexpected of colleagues, the head of the mailroom at his first job at Greenwich Associates, Sam. Sam wore a tie to work every day, explaining that his father told him that success is “getting a job where you get to wear a tie to work every day.”

Be a giver, not a taker. “The more you give in the community in which you live and work, the healthier you are,” said Hayes, referring to the snowball effect of fulfillment leading to happiness and happiness leading to increased productivity and health. Every person born will die one day, but Hayes said that what truly matters is what each person does in between.

Hayes concluded by encouraging the audience members to be conscious of the career decisions they make and rely on a values system above all else. He also sat down with Daniels Dean Brent Chrite to talk about a range of topics. Dean Chrite and Hayes discussed Ball’s integration strategy in light of the company’s acquisitions through the years—of Neuman Aluminum, AB InBev and U.S. Can, to name a few. Hayes offered insight into the company’s holistic philosophy of environmental sustainability and focus on culture in addition to profitability. He also shared his thoughts about the topic of Millennials in business and how companies can do more to engage them as well as all employees, and create a positive company environment.