“Some rocket scientists walk into a bar…”

Ok, ok–they weren’t rocket scientists yet, and it wasn’t exactly a bar, but I couldn’t resist!

Although I have lived in Denver for several years, I had never made the migration to take the Coors Brewery Tour in Golden.  This weekend, one of my friends invited me to attend the VIP Tour with her, and I decided it was time to experience this local gem.

After the 30 minute drive, we walked into the factory, which was packed with people.  Some of them were clearly tourists, complete with enormous cameras and shirts that said “Kansas.”  Others were students from the Colorado School of Mines, there for the free beer.  It was a diverse crowd, abuzz with excitement for the Coors Brewery experience. 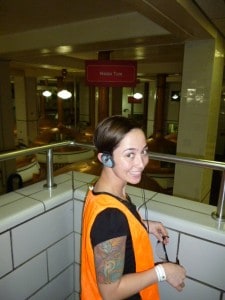 Our group consisted of seven Mines students and me.  As a Daniels MBA student, I was definitely the odd one out; everyone else was studying electrical engineering, metallurgy, or another branch of science that sounded like it belonged in Lord of the Rings.   Our tour guide directed us to put on orange vests (“Sorry if they smell bad,” she said apologetically), huge safety goggles, and walkie-talkies with enormous headphones (“I don’t even remember how to put these on,” said my friend, who had long since made the switch to earbuds).  After we were suited up, we proceeded to the elevators.

The tour was fascinating.  Our guide walked us through every step of the beer-making process, starting with the raw ingredients and ending with the much-anticipated free beer.  It was a sensory experience; we got to dig our fingers into a box of hops, smell the beer “cooking” (with apologies to our tour guide, I can’t remember the proper term!), and shake a container of grist.

At the end of the tour, we were ushered into the “VIP Room,” where we were given samples of two special beers.  One of the beers, which was not available to the general public, was made with Chardonnay grapes and had won a medal at a beer festival.  The other was a sweet, pink, strawberry-infused brew which drew rave reviews.

After our tour, entered the tasting room, where every single beer made by Coors Brewery was available.  We spent the rest of the afternoon people-watching.  Although I was only half an hour away from Denver, I felt like I was in another world.  The tour was a great way to be a tourist in my own state.

On a side note, I know a few Daniels students who were hired by Coors after graduating, and they are quite dedicated to their employer. Coors even has a work/life balance team which ensures that its workforce is happy and healthy.