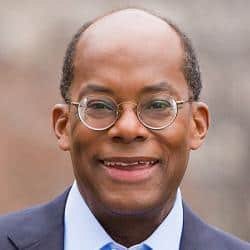 “Roger Ferguson is one of the most amazing leaders I’ve ever met,” says Professor Conrad Ciccotello, Director of the Reiman School of Finance at Daniels and a Research Fellow in the TIAA Institute. “While our finance students and faculty will have a particular interest in hearing Roger, he is a visionary whose business insights will also be of great benefit to the broader Daniels, DU and Denver communities.”

Ferguson is President and CEO of TIAA. He is the former Vice Chairman of the U.S. Federal Reserve System, where he led the Fed’s response to the 9/11 attacks. He was previously head of financial services for Swiss Re, an associate and partner at McKinsey and Co., and an attorney with Davis, Polk & Wardwell.

According to Fortune Magazine, only 15 black executives have ever made it to the Chairman or CEO position of a “Fortune 500” listed company. Of these 15 executives, there are currently 5 active, representing 1 percent of the Fortune 500 top leadership. Ferguson is among the 1 percent.

Ferguson serves on the boards of Alphabet and General Mills and chairs The Conference Board. He co-chairs the American Academy of Arts & Sciences’ Commission on the Future of Undergraduate Education. He served on the Council on Jobs and Competitiveness in the Obama administration, and he holds a B.A., J.D., and a Ph.D. in economics, all from Harvard University.