The Bruce Springsteen of the Cable Industry 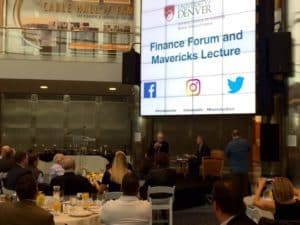 Comcast Founder Julian Brodsky was introduced to a room of about 100 audience members as the Bruce Springsteen of the cable industry. “He is a rock star,” said The Cable Center’s President and CEO Jana Henthorn.

Brodsky was the featured speaker at the Finance Forum and Mavericks Lecture Oct. 18 at The Cable Center. The event was presented by The Cable Center and the Reiman School of Finance at the University of Denver’s Daniels College of Business.

Brodsky, who shared that he was first attracted to cable in 1959, fielded questions from moderator Stewart Schley, who has covered the cable industry for years.

When Ralph Roberts, a client of Brodsky’s accounting firm, decided to invest in a small cable business in Tupelo, Mississippi, Brodsky wanted in. The two of them, along with Dan Aaron, founded what would become Comcast, which is one of the country’s largest corporations.

Brodsky said after the accountants dominated the industry, the marketers came into play until 1975.

“Then things radically changed,” he said. Brodsky described how cable had been built out across the country when they discovered HBO. “It turned the business model of the industry on its head.” Instead of having penetration of 75 percent in a market and charging $6 to $10, they could still make money with 30 to 40 percent penetration and charge $15 to $25 a month.

That soon gave birth to news cable networks where content people were primary, Brodsky said. Then, the internet came and network engineers, computer scientists and graphic designers were in demand.

“The remarkable evolution of the cable industry would not have been possible without innovative approaches and creative decision making regarding financing methods, capital structure, mergers and acquisitions, investing in startup ventures, dividends and repurchases,” said Ron Rizzuto, professor at the Reiman School of Finance and Senior Fellow for The Cable Center.

Brodsky was known for his innovative financing techniques that broke new ground, and over his long career he became a mentor to many of the industry’s leaders. In 2002, Brodsky and Comcast stunned the industry by acquiring the much larger AT&T Broadband in a deal valued at $47 billion. It expanded Comcast services to 22 million customers in 38 states.

Lizzie Bolyad, a graduate marketing student, didn’t realize the media and telecommunications industry is still experiencing so much growth and innovation until attending the Finance Forum.

“I figured there was not much left to be done in this industry and he completely convinced me otherwise,” she said. “It makes me excited to see what the future holds in regards to technological advances and further innovation.”

Denver MBA student Alex Lewis enjoyed learning about how much the cable industry has changed in the past 50 years but also used the event as a networking opportunity.

“As a current student, I find these events helpful as I get to connect with alumni while learning about a different industry or topic,” he said.

The Reiman School of Finance will host another Finance Forum in the spring. Brodsky is a member of the Cable Hall of Fame and was named a Community of Innovators Innovation Laureate in 2017. He is a CPA and a graduate from The Wharton School of Finance and Commerce of the University of Pennsylvania.