A Journey to Change the World 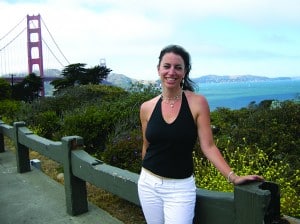 If ever there were a woman to embody the spirit of Daniels, Dafna Michaelson is her name. Passionate, genuine, innovative and sharp, this driven Daniels alumna has had an enormous impact on her community, and by the end of 2009, will have reached out to the rest of the country as well.

Raised on the east coast, Dafna attended high school at Cincinnati’s School for the Performing Arts. At the age of 17, she participated in March of the Living—an educational program that brings groups of Jewish teens to Poland for two weeks—and the trip set the stage for the rest of her life. After graduation, she moved to New York City to receive her Bachelor of Arts in music from Yeshiva University’s Stern College for Women. Though she loved music, it was a passion for her Jewish heritage that drove Dafna’s early career moves. After moving to Denver with her fiancée, soon, Dafna was invited by a new friend to help out with a conference at DU through the Center for Judaic Studies. The director of the Center was so impressed with Dafna’s work that he offered her the directorship of the Holocaust Awareness Institute—a role that she accepted without hesitation. In two years time, Dafna helped grow the program significantly. It was then that Dafna began taking classes toward an MBA at DU.

Why an MBA? “It was the area where I had the least amount of knowledge,” admits Dafna. “I wanted our program at the Institute to continue to grow, and I felt that the best way to do that was to run our nonprofit like a business, but I needed business training.” Soon, however, Dafna was recruited by another nonprofit—one that held a special place in her heart. Dafna was asked to become the New York program director of March of the Living, the program she herself had attended years before. She was the first alumna to work full time in Holocaust education. Dafna and her husband moved to New Jersey, and for the time being, Dafna put her DU education on hold. When she returned to Denver three years later, she was pleased to learn that her position at the Holocaust Awareness Institute hadn’t been filled. Dafna was hired back. In August 2001, five years after her first class, Dafna graduated from Daniels with an MBA. By then, she had a newborn baby daughter.

After moving to and from New Jersey once more, Dafna ultimately wound up as the director of volunteer services at Denver Health—an organization that provided nearly $276 million of care to the uninsured in 2008 alone ($2.1 billion in the last 10 years) but remains financially solvent. Dafna’s legacy: increasing volunteer participation by 44 percent and helping the disabled ease back into the workplace through volunteer positions. For her efforts and success, Denver Health encouraged Dafna to apply to the prestigious Leadership Denver, a program created in 1974 to bring together 55 community leaders each year for the purpose of expanding their commitment to voluntary civic responsibility. She was accepted into the 2008 class.

Having considered a run for State Senate, in 2008, Dafna and her boyfriend purchased a lottery ticket and as many do, the two discussed how they would spend their hypothetical winnings. “I said that if I had millions of dollars, I would travel around the country and talk to people to learn about how states can work together, how everyday people come up with great ways to solve the country’s problems,” she says. Her boyfriend’s response? “He said, ‘You don’t need to win the lottery to do that. Why not now?’”

And so, in July 2008, Dafna established a nonprofit, entitling her organization the 50 in 52 Journey. Her last day with Denver Health was October 31, 2008. And on January 7, 2009, Dafna kicked off her year-long journey with a trip to Delaware, the first state. By the end of the year, she will have visited all 50 states (her final state: Colorado). “My goal is to meet the people who are moving America forward and helping to solve community problems,” Dafna says. Though she has done some fundraising (and receives donations through her website), Dafna liquidated her 401k to finance her journey.

Needless to say, Dafna’s 2009 schedule is hectic, but she has great support. Dafna structures her journey around her “mom” schedule, travelling Wednesday through Friday each week (she shares custody of her children with her ex-husband). For larger states, such as New York and Ohio, Dafna spends five days travelling. Dafna’s boyfriend is her website developer. Her children are what keep her going. And the people she meets across the United States are her inspiration.

Since January, Dafna has visited Delaware, Utah, Ohio, Georgia, Texas, New Mexico, New York, Arkansas and Nevada, meeting “problem solvers and idea generators” who have been nominated on her website (www.50in52journey.com). From the high school students/founders of community service organization Making a Difference, to the founders of Common Cents, an organization that teaches young people about philanthropy by giving them the opportunity to raise and give money, to a 90-year-old music teacher and co-founder of the National Association for Teaching Singing, Dafna has met incredible people, but there’s one thing she didn’t prepare for. “I didn’t realize when I began this journey that I would fall in love with all of these people,” she says. “They’ve let me into their lives and are sharing their passion with me, and for that I am eternally grateful.”

Thinking like a Daniels grad, after Dafna completes her travels, she will strive to bring together her year’s work in the form of a sustainable network and resource, the 50 in 52 Foundation, which she describes as a “think tank without walls.” The idea: to match up similarly-themed programs across the country, offer training and resources, and help people support one another’s efforts and programs. Dafna also plans to publish a book before 2010. And though it certainly won’t happen in 2009, Dafna still thinks about running for a political office one day, too. “This year, I want to figure out if getting involved in politics is the best way for me to make a broad and deep impact on the world. If I decide that it is, that’s what I’ll do next.”

With her 8-year-old daughter and 6-year-old son attending Ricks Center for Gifted Children at DU, Dafna still has strong ties to her alma mater. And it seems that both of her children have a lot of their mother in them. In 2008, Dafna’s son spearheaded a fundraiser in his kindergarten class to adopt a mother polar bear and her two cubs and Dafna’s daughter recently raised money for both Denver Health and Hadassah, a  women’s Zionist organization of which Dafna the Denver chapter president. “My kids are just like me—little activists” she laughs. “What I love about Ricks is that they are teaching these students to be stewards of social good.”

Unsurprisingly, Dafna says she isn’t finished with her education, and hopes to eventually head back to DU to earn a Ph.D. in social change and religion through the joint DU-Iliff School of Theology Ph.D. program. “For me, education is the foundation of who I continue to become,” she says. In fact, Dafna believes that she simply wouldn’t have been able to accomplish all that she’s done—and all that she intends to do—without her Daniels education. “When I graduated from Daniels, I knew how I could have an impact, and how I could best contribute to my community. It wasn’t just business knowledge I gained—it was the ability to move forward and make a difference.”